PLEASE NOTE: Flash remote systems are NOT MIX-N-MATCH!!! In other words, a Phottix Commander is NOT compatible with a Sony Receiver. So pick one system and stick with it. The compatible flashes listed in each section offer TTL+HSS and flash control from the commander. The receivers may be able to trigger other flashes – but without all those bells and whistles. 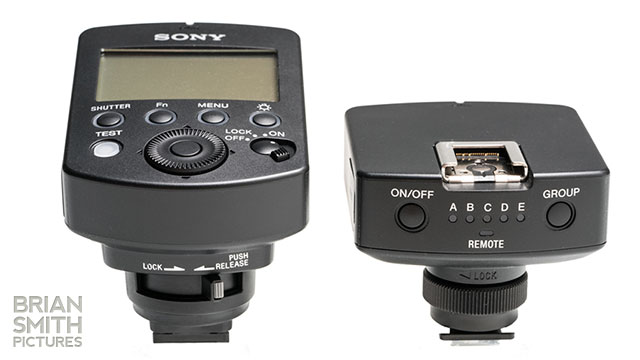 Sony’s new radio controlled system will allow for an extremely flexible wireless flash shooting experience with exceptional performance in all types of shooting conditions. The system can control a maximum of 15 separate flash units in up to 5 groups of flashes. While using the system, photographers have the ability to control the exposure of connected flash units either manually or automatically depending on preference. Additionally, the new lighting control system will be capable of flash sync speeds of up to 1/250th of a second, along with High Speed Sync (HSS) at higher sync speeds. 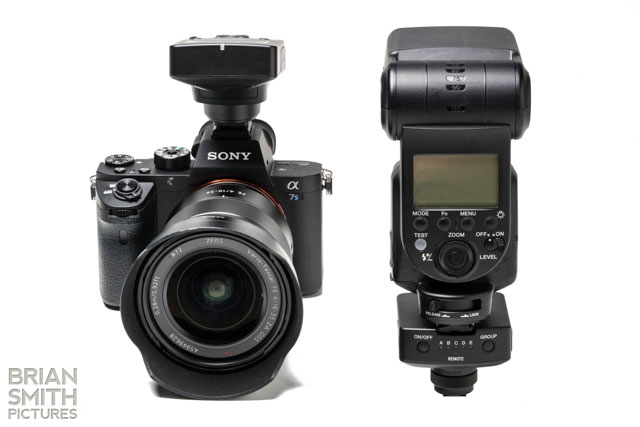 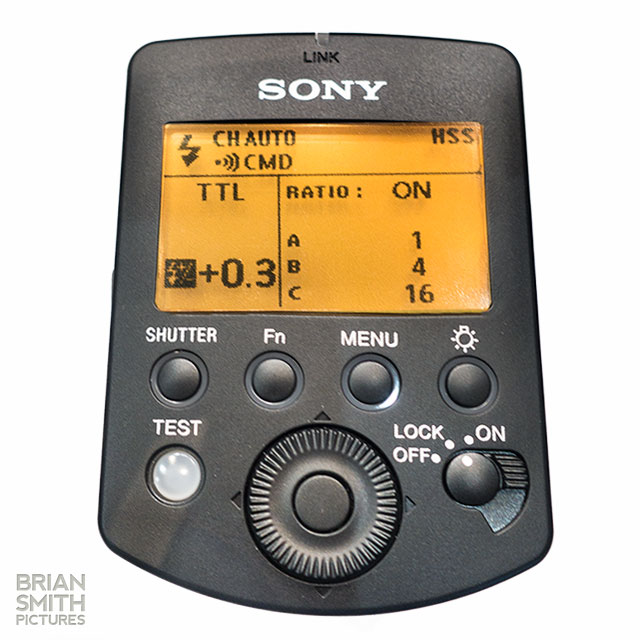 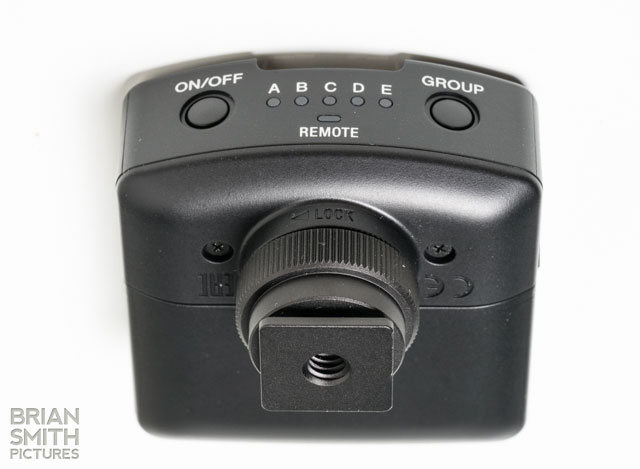 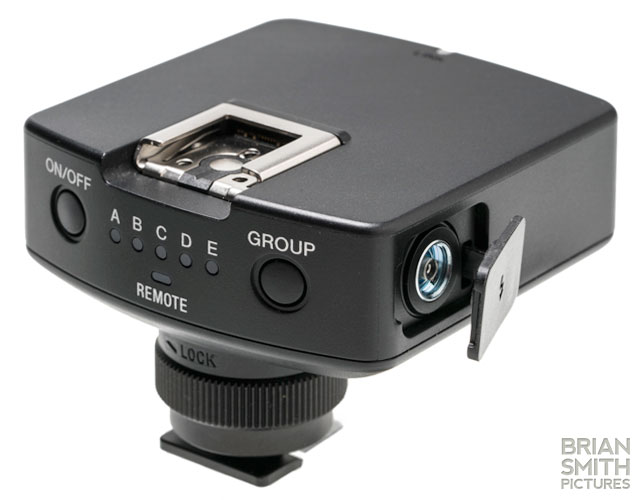 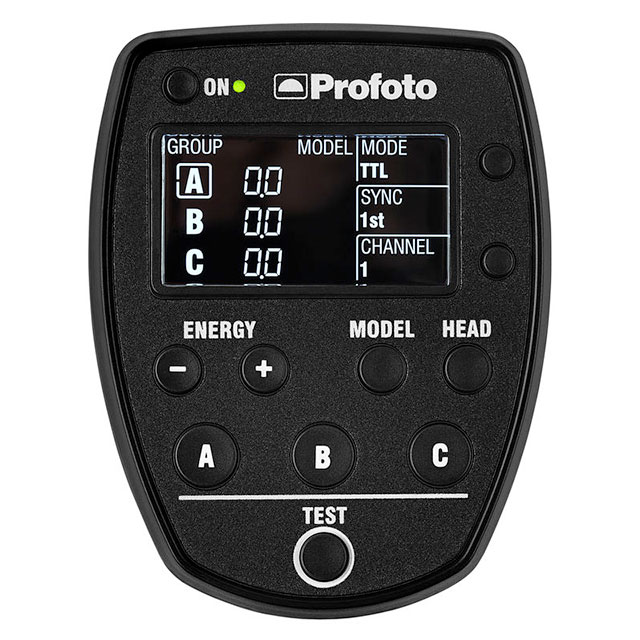 Profoto Air Remote TTL-S ($429) from B&H Photo | Amazon is a small, wireless radio transmitter for Sony Multi Interface shoe cameras. This powerful remote provides you with an outstanding set of features, including support for wireless power control and TTL, including high-speed sync, with Sony cameras. Operating on a 2.4 GHz frequency, the Air Remote can sync with flashes up to 1000′ away with normal triggering and 330′ with TTL. TTL is useful because it offers automated shooting and exposure and brings the advantage of high-speed sync, enabling the use of shutter speeds up to 1/8000 second. Also, the controller has 8 channels and 3 groups, ensuring minimal interference with other nearby systems and equipment. Each group can be controlled independently from one another, permitting ±2 EV adjustment of power ratios for TTL systems and nine stops of manual control. You have access to remotely turn on/off the modeling lights or heads, making it easier to adjust lights in your studio. Additionally, there is a mini-USB port for installing firmware updates and it runs on two AAA batteries.

Profoto Connect Wireless Transmitter for Sony ($299) from B&H Photo | Amazon offers simple wireless connection with AirTTL lights that controls flash sync, remote control, Auto TTL, and HSS. The transmitter also controls flash sync and remote control in Air lights. There are three settings on the Connect transmitter itself. Auto being the first, takes all the guess work of setting up your flashes. The manual setting is there if you want to set the flashes yourself and be more creative. The final setting, of course, is to turn it off when the transmitter is not in use.

By downloading the Profoto app and with Bluetooth connection, you can control your lights wirelessly as well and upgrade your firmware later through the app. The Connect works on a frequency of 2.4 GHz and up to eight channels with an operating range of a 1000′ when using it with normal sync flash and remote control, and 330′ with Auto TTL and HSS. The built-in lithium-ion polymer battery has a battery life of 30 hours and is rechargeable via the included USB cable. Additionally, the transmitter powers off after 60 minutes of inactivity. 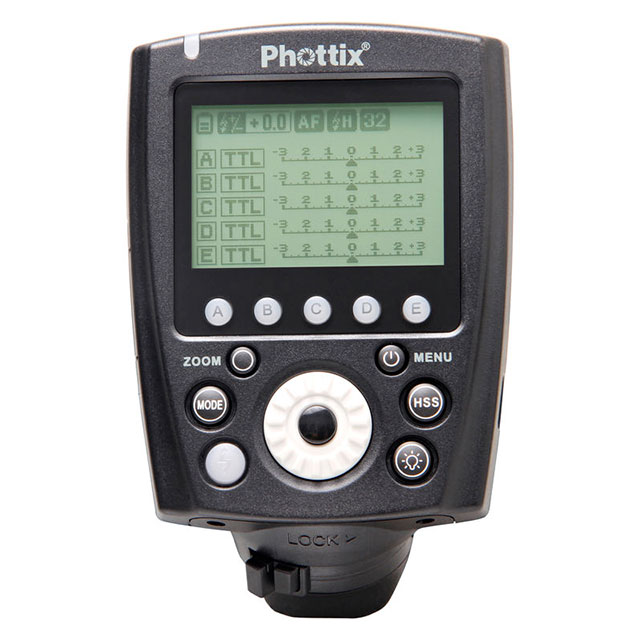 Phottix has announced their much anticipated Odin II TTL Flash Triggers which add cutting edge functionality and features to their flagship trigger will be available for Sony multi-interface shoe in late spring 2016. The Odin II offers access to each of the 5 Groups has its own quick-access button. Changes are made by turning a large, perfectly-placed, control dial. Pick the light. Make the change. Lock it in. Shoot. A large, illuminated LCD panel shows all settings at a glance. Control five lights in TTL Auto or Manual. Switch the Group OFF and its display line disappears from the screen. Displaying only active groups assures an easier and simpler viewing experience. 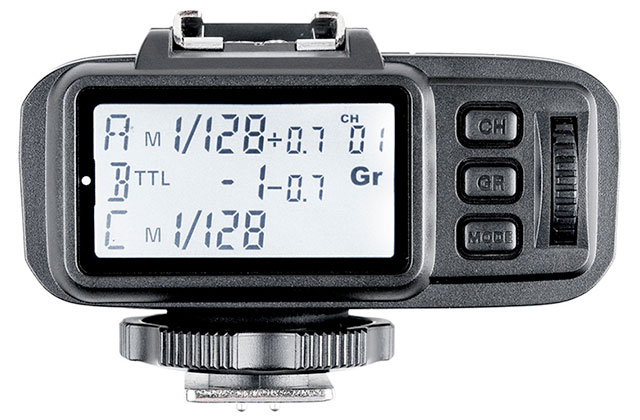 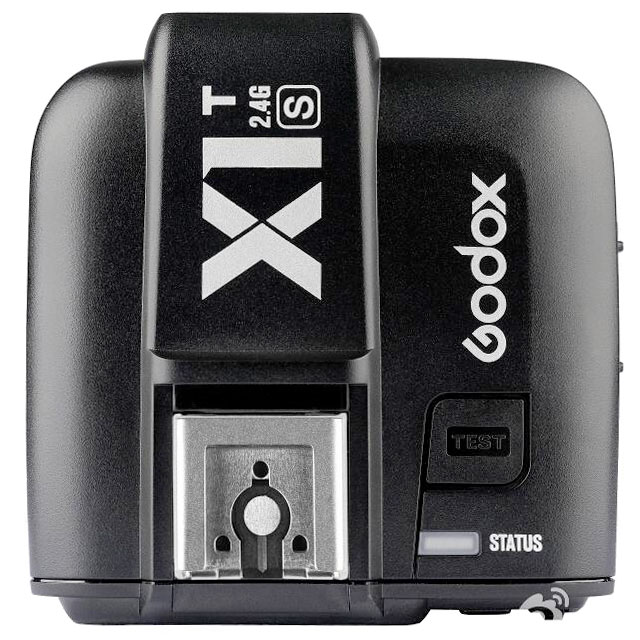 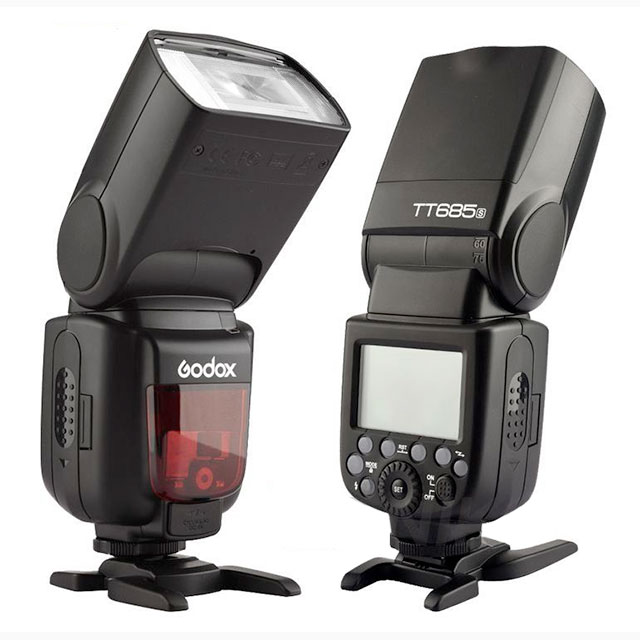 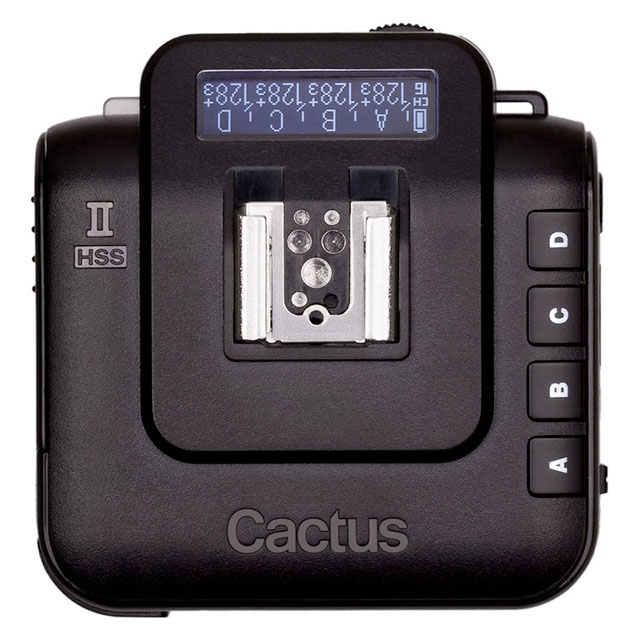 It uses 2.4 GHz radio communication to trigger other units from up to 328â€² away. Cactus V6 IIs Flash Transceiver offer two high-speed sync modes. The normal setting uses a protocol depending on the camera system involved whereas the Power Sync can boost the flash for moments when Normal HSS is not powerful enough.

Users will be able to set up flashes in one of sixteen channels or three groups. Also, it has a Multi-Master setting that allows multiple shooters to trigger the same flashes, useful for demonstrations or events with a second shooter. By using flash profiles to register specific speedlights, the V6 IIs gains a few capabilities, such as an Absolute Power Mode, which calculates the equivalent power settings between multiple flashes. Additionally, it has a TTL pass-through hot shoe on the top and offers a 3.5mm sync terminal for plugging into strobes and other lights.

I have not had a chance to try this one out, but it looks interesting. Please note that while Cactusâ€™ press release mentions Focus Assist â€“ external focus assist lights are normally NOT compatible with mirrorless cameras, so donâ€™t hold your breath on that one. Please Note: this is a transceiver which means you need one unit for the camera and one additional transceiver for each flash you wish to fire. 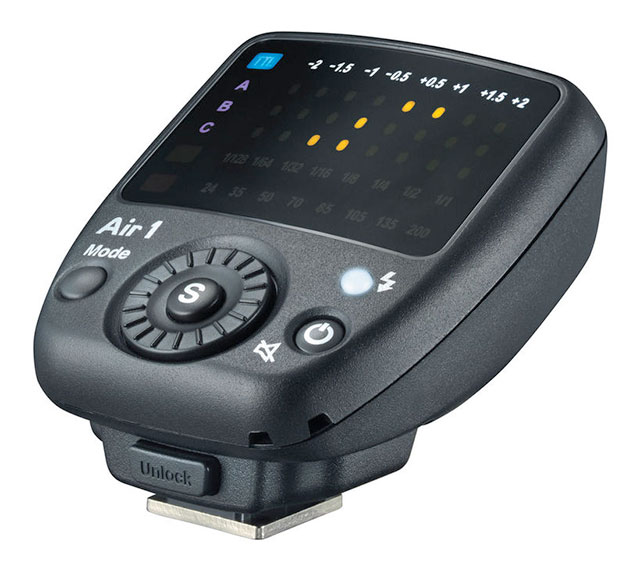 Nissin Air 1 Commander ($79), featuring the Nissin Air System with 2.4 GHz radio transmission for wireless master TTL control over NAS-compatible flash units. This unit is compatible with Sony cameras with Multi Interface Shoe that utilize ADI / P-TTL metering and offers a triggering range of up to 98′. Also, it features eight channels and three groups for setting up numerous flashes with different settings and modes all from the commander unit.

High-speed sync is supported with a maximum sync speed of 1/8000 second along with compatibility for slow, 1st & 2nd curtain sync modes. The zoom setting of the flash can also be manually adjusted from 24-200mm along with the power from 1/1 to 1/128. The Air 1 features a color LED control panel to view settings and make adjustments as well as an AF assist beam for focusing in low light conditions. This radio commander unit features the newer Sony Multi Interface Shoe and is not directly compatible with the older Sony/Minolta-style Auto-lock Accessory Shoe. 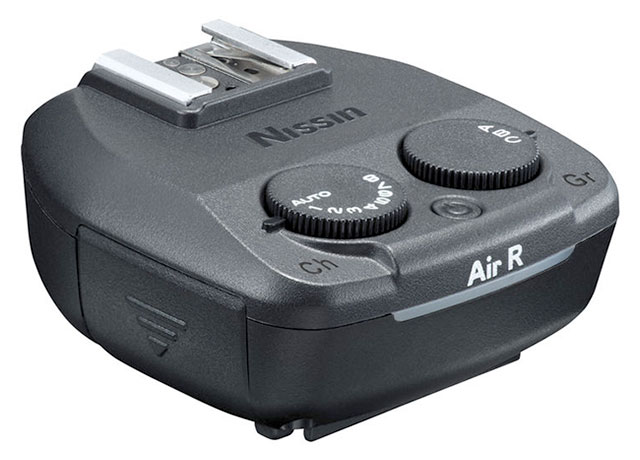 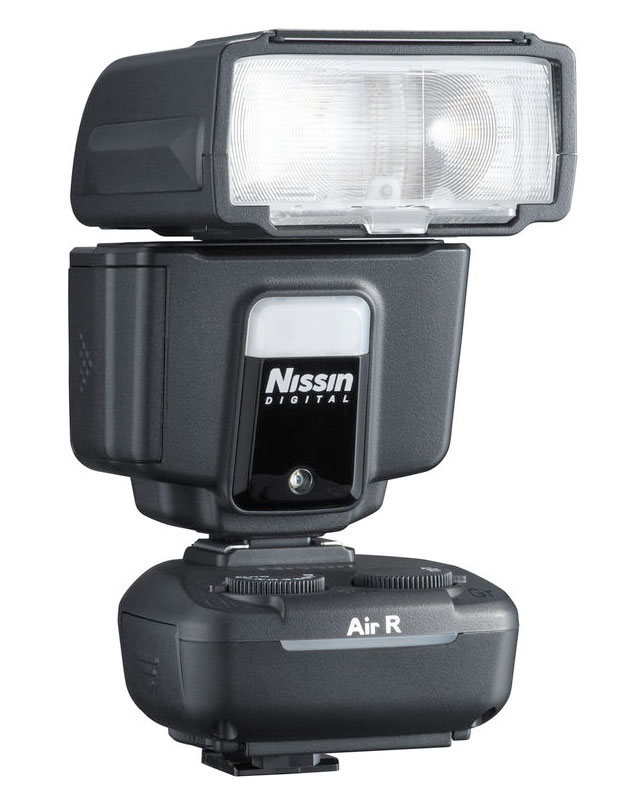 Nissin Air R receiver has a hot shoe on the top for communication for connecting TTL flash. 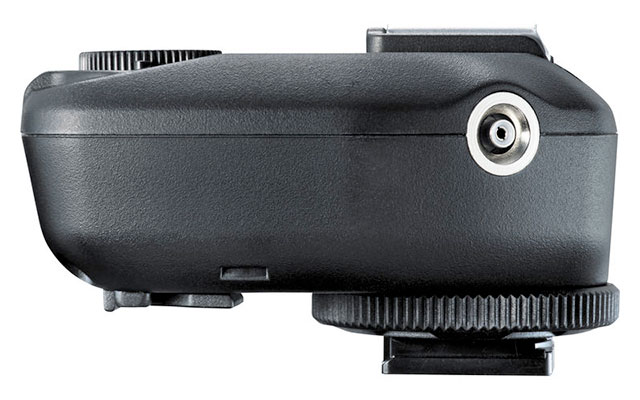 For strobes and manual flashes, Nissin Air R includes a PC sync terminal for basic connections. Mounting the receiver is simple as well with a cold foot on the bottom with a 1/4″-20 thread for stands. 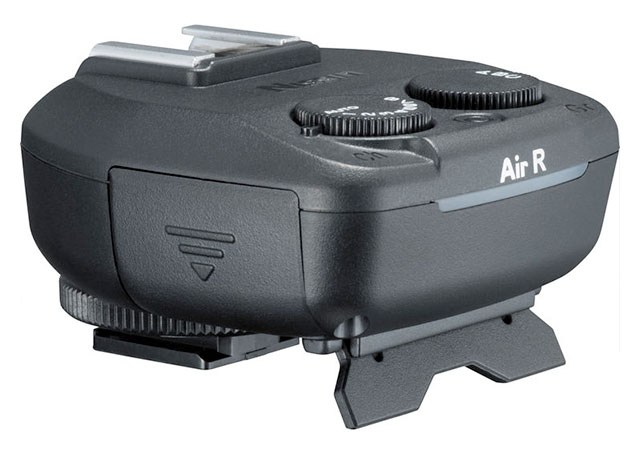 Nissin Air R also has a flip-out stand for placing directly on a flat surface. 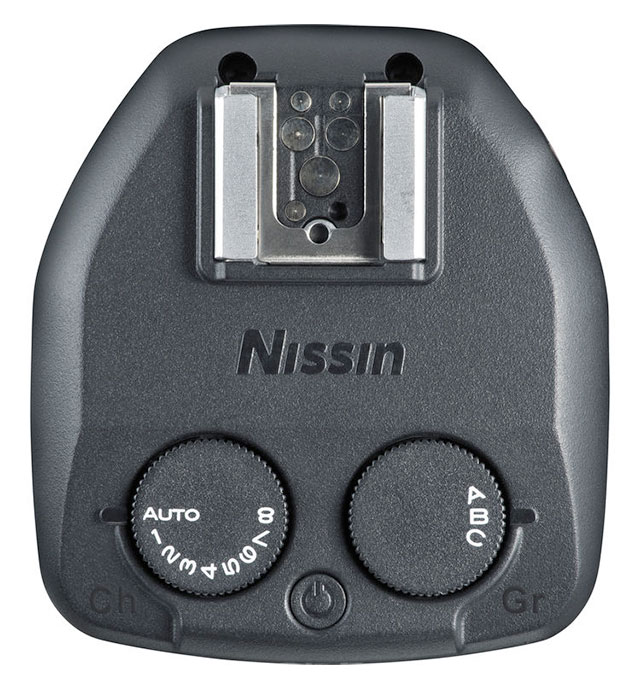 Nissin Air R features the newer Sony Multi Interface Shoe and is not directly compatible with the older flashes featuring the Sony/Minolta-style Auto-lock Accessory Shoe without the use of an optional adapter.