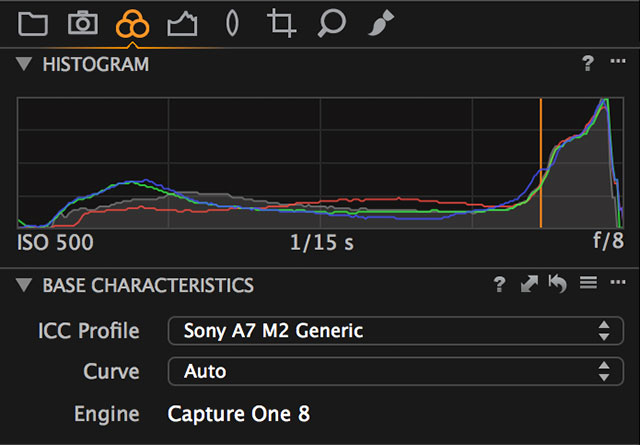 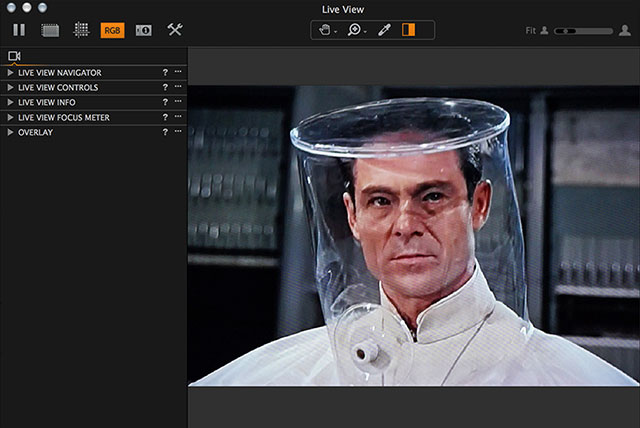 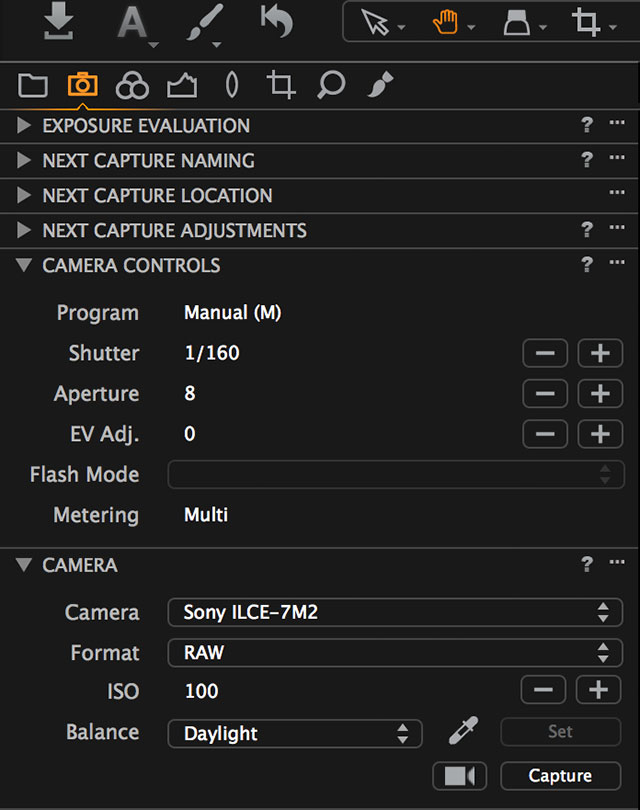 Phase One has announced that starting today, a special version of Phase Oneâ€™s Capture One Express software will be available free of charge for owners of selected Sony cameras worldwide. Now, these Sony camera owners can leverage the renowned high-quality raw image conversion that Capture One delivers.

â€œSony shows great innovation and leadership in the photography industry,â€ said Henrik O. HÃ¥konsson, CEO and President of Phase One. â€œWe are excited and proud to be cooperating with Sony to provide advanced photographers with tools that bring out the best in their images.â€

Additionally, Phase One has developed a special version of its Capture One Pro software that gives Sony camera owners access to more pro grade features, such as Local Adjustments, Film Grain and more at an attractive price. Both new special Capture One applications share the same architecture and imaging pipeline as the renowned Capture One Pro application, which has been released in Capture One Pro 8 today. 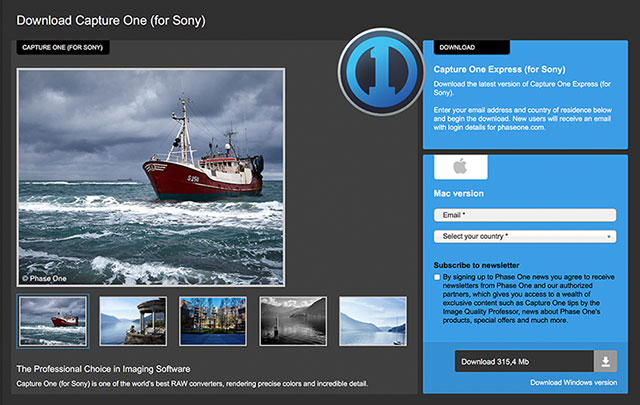 Capture One for Sony offers Raw file support for:

Upgrade to Capture One Pro for Sony

For the most tools and functionality, pony up thirty bucks (23 euros) to upgrade to Capture One Pro for Sony. This is a much more robust program which adds more advanced lens corrections and real tethering for supported Sony cameras.

This page outlines the differences between Capture One Express and Pro for Sony (PDF). 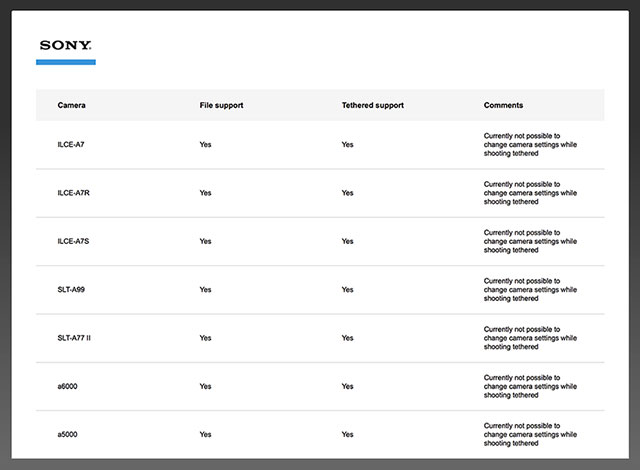 Get more information about Capture One Pro for Sony go to: phaseone.com/sony

Here’s a Couple Videos to Get You Started

The free Capture One Express for Sony software includes basic tools and lens profiles for RAW conversion. It also offers what Phase One calls “tethering support via hot folder” for Sony A7, A7R, A7S, A99, A77II, A6000 and A5000 cameras. This means that you connect via Sony Remote Camera Control and use Capture One Express to watch a hot folder – this is similar to the way Adobe Lightroom and Bridge support tethering with Sony cameras. 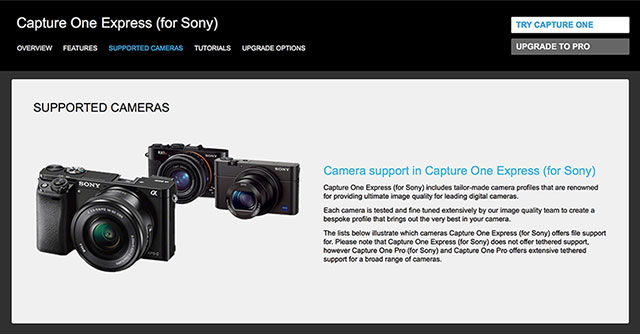 Here’s the link to Download Capture One Express (for Sony)

How to Capture to a Hot Folder using Capture One Express for Sony:

Getting Started with Capture One Express for Sony:

If you need support for other camera brands get Capture One Pro 8 software here.

Sony’s Remote Camera Control application allows you to control your Sony A7/A7R/A7S and to record images to your computer via the micro USB cable supplied with your camera. You can also use it to change camera settings from your computer, or perform interval-timed shooting.

Setting your camera up for tethered shooting 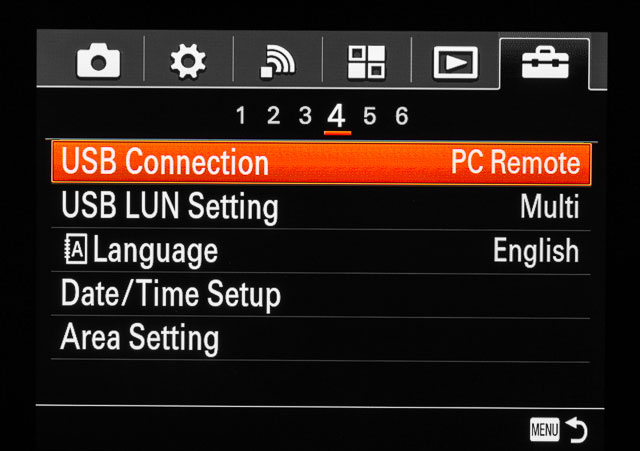 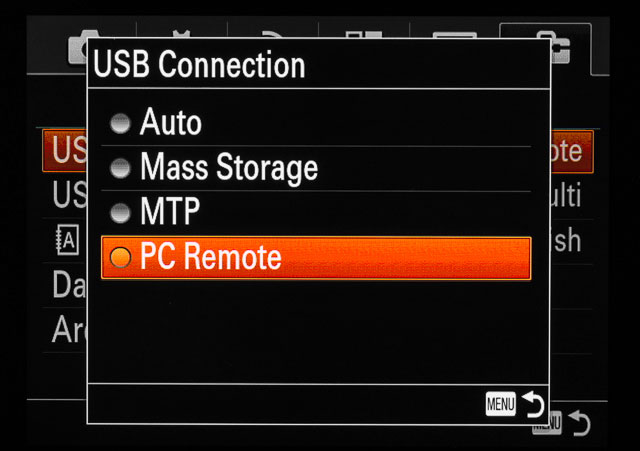 2. Connect the micro USB cable supplied with your camera to the Multi-Terminal USB port on the side of the A7/A7R/A7S camera. 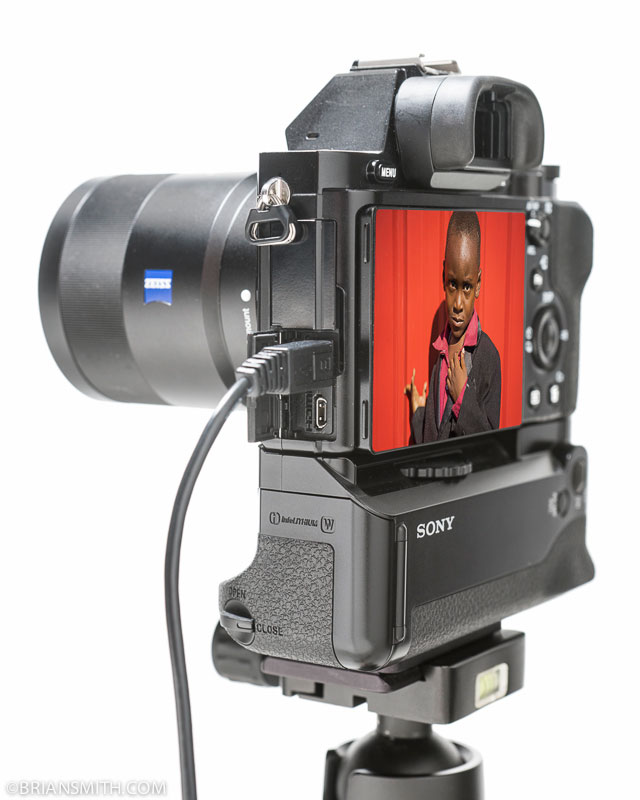 3. Plug the other end of the cable into your computerâ€™s USB port. Because the cable that comes with the camera is very short, I extend the range using a TetherPro USB 3 SuperSpeed active extension cable and support my laptop on a TetherTools Tether Table. 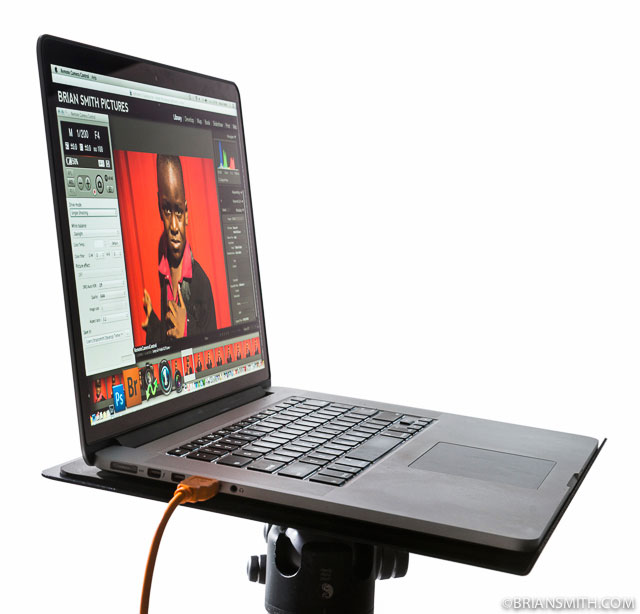 4. Turn on your camera then Open Remote Camera Control to establish a connection. Once you do, you can set a destination folder and control a number of camera settings. 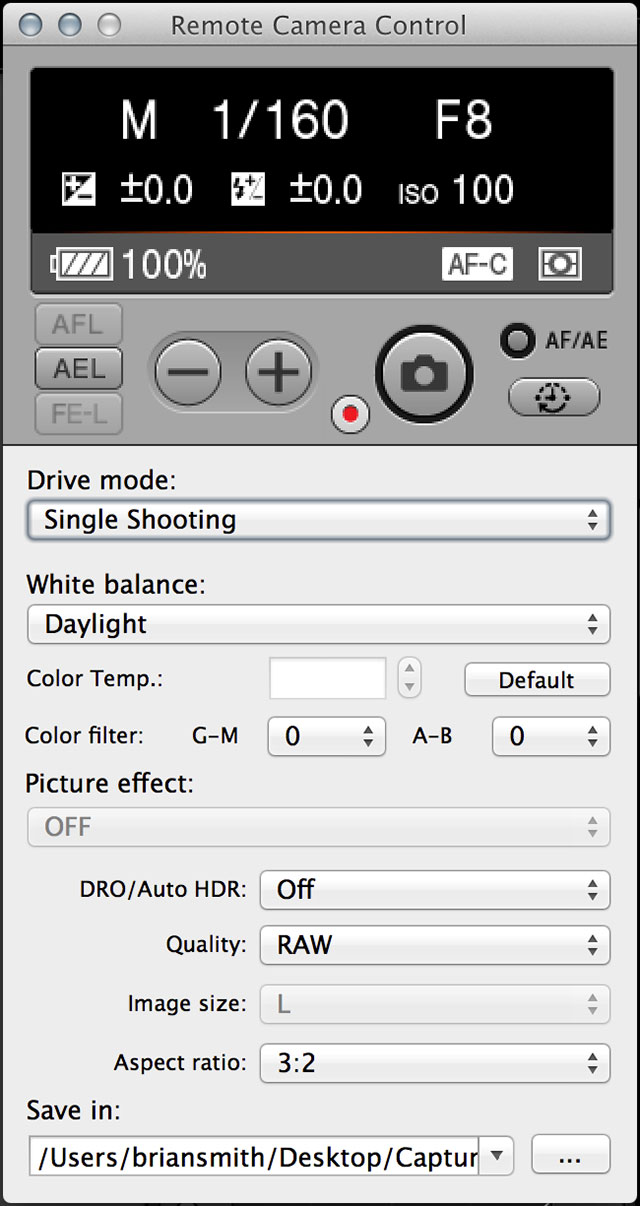 5. You can view those images as theyâ€™re transferred to your computer by using Sonyâ€™s Image Data Converter software or third-party applications such as Adobe Lightroom, Aperture or Capture One. I prefer Adobe Lightroom – I set to watch the import folder: 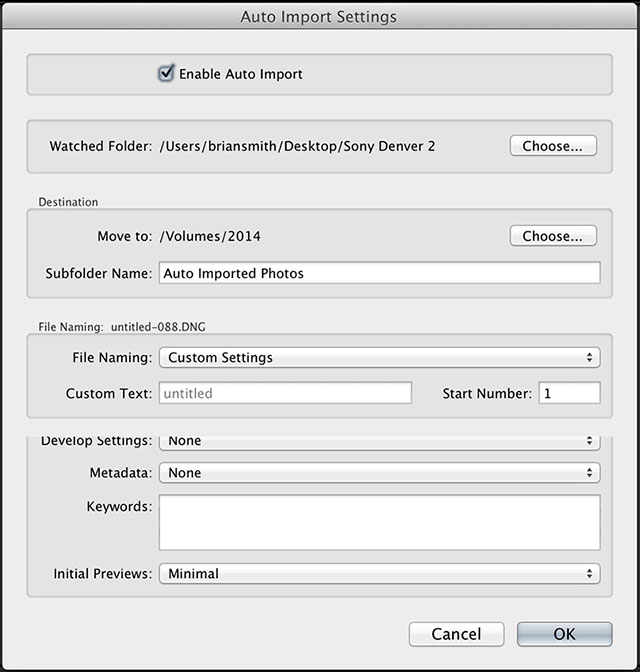 Since I’ve got big feet and all the grace of a mule, I love the High-Visibility Orange TetherPro USB 3.0 SuperSpeed Active Extension Cables. They keep me from tripping and tearing down the set. 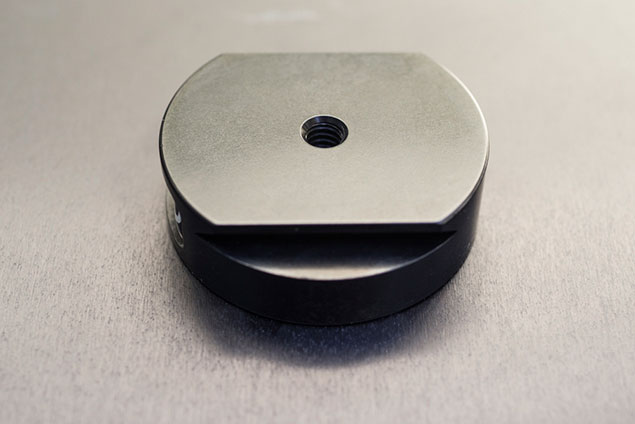 Tether Tables can be mounted on industry standard lightstands or tripods that you probably already have on set. I particularly like Tether Tools LoPro-2 Pro-Bracket for my Tether Table Aero. It’s small and light for travel and grooved to slip right into Arca-style Quick Release Heads that I have on all my tripods. It’s thin profile allows you to easily slip your Tether Table into your laptop bag or at the top of a roller bag when your head out for your next photo shoot. 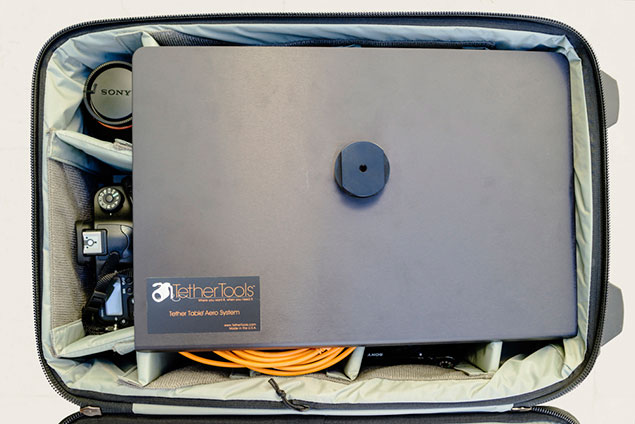 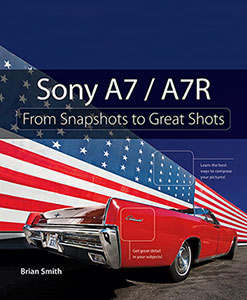 For more tips and tricks about getting the most out of your Sony A7 or A7R, check out my latest book from Peachpit Press, ‘Sony A7/A7R: From Snapshots to Great Shots‘. These ground-breaking compact full-frame cameras which combine the features and image quality of a top-end DSLR in a smaller camera at half the weight, quickly racked up an impressive list of accolades including Popular Photography’s and Photo District News ‘Camera of the Year’.

This book is your guide to getting the most out of Sony’s A7 and A7R cameras. While the camera manual explains what the camera can do, it doesn’t show how to use the camera to create great images!

That’s where ‘Sony A7/A7R: From Snapshots to Great Shots‘ comes in. Starting with the top ten things users need to know about the camera, it carefully guides you through the operating features and how to use them with practical advice on which settings to use when, great shooting tips, and assignments at the end of chapter.