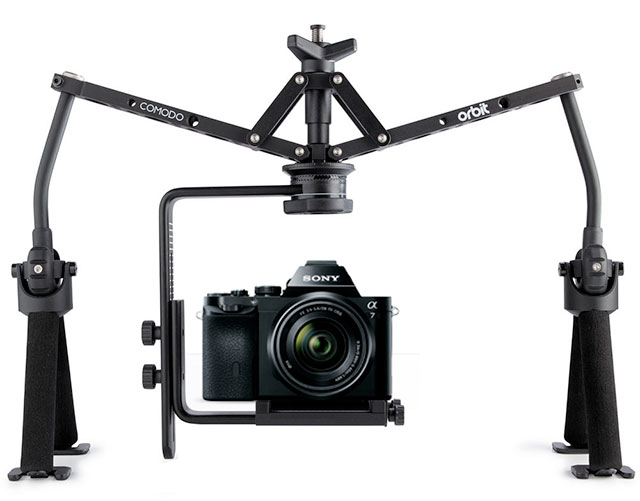 Comodo Orbit Handheld Stabilization Rig ($399 After Instant Rebate) is a mechanically driven, twin grip gimbal stabilization system. Designed to support HDSLR/mirrorless cameras and small to medium sized camcorders weighing up to 11 pounds, the Orbit allows the camera operator to move freely around the subject, capturing entire scenes in a single take with just one camera. It is easy to balance and operate, requiring no additional weights, motors, or batteries. This makes the Orbit ideal for filmmakers of all levels to capture fluid and steady footage without a steep learning curve or long set-up times.

The Orbit utilizes two gimbal handgrips to isolate the camera from bumps and shakes, helping the camera to seemingly float in space. With a twin grip design, the stabilizer has the unique ability to be passed from one operator to another, allowing it to travel through windows or other tight spaces. Having two handgrips also reduces operator fatigue, letting you shoot longer than with single-handed stabilizers.

The Orbit is built around two advanced gimbals atop each handgrip, which provide fluid movement along multiple axes. Each gimbal independently moves to give let the camera seemingly float through the air. Having two handgrips also allows you to change directions quickly and smoothly, as well as reduce operator fatigue common to single-handed stabilizers.

Unlike other stabilizers which keep the camera level at all times, the Orbit lets you adjust the tilt of the camera using your thumbs. Easily tilt the camera up or down while operating, letting you capturing low-angle and high-angle shots, or even mimic the effect of jib or crane-style shots.

Passing the camera through a window, over an obstacle, or under a subject can often require highly trained camera operators with extensive amounts of equipment. The twin-style grips on the Orbit give filmmakers of all levels the ability to easily pass the rig from one operator to the next without upsetting the fluidity of the shot.