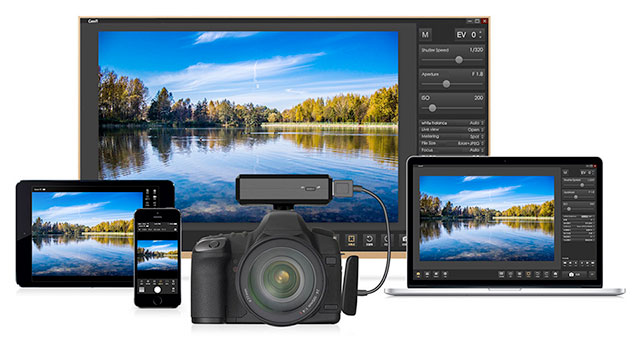 CamFi Wireless Camera Controller ($120 from Amazon) now supports Sony cameras using the latest CamFi 3.0 app. Sony camera owners can attach the CamFi wireless controller to their camera via a USB cable to access and control the camera remotely using a laptop or tablet over Wi-Fi.

For Sony shooters already using the Remote Camera Control app, as long as Remote Camera Control meets ALL your needs there’s no need for this. BUT…CamFi is an option for those who want longer WiFi range, a hard-wired option, compatibility with PCs – not just smartphones/tablets, multi-camera control or the ability to transfer RAWs – not just Jpegs.

For Sony shooters tethering using Capture One Pro – that’s my choice for tethering as well – but it’s strictly for USB-tethered shooting to MAC/PC. CamFi will do that too – but it also offers wireless control and transfer to smartphones/tablets and multi-camera support which is not possible with Capture One Pro.

Check out the CamFi Sony support Page for details on how to set up and use CamFi with Sony cameras.