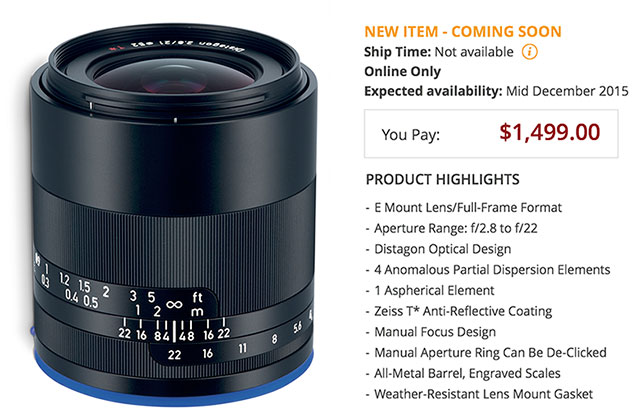 The first pre-orders are expected to ship mid-December 2015 – but if it sells like Zeiss Batis – better order early if you want yours by Christmas!

Featuring a compact form factor well-suited for full-frame Sony E mount mirrorless cameras, the Zeiss Loxia 21mm F2.8 E-mount lens is a wide-angle prime based on the Distagon optical concept for a marked reduction in distortion as well as consistent, even illumination and sharpness from edge to edge. The optical design also incorporates four anomalous partial dispersion elements and one aspherical element to control chromatic aberrations and increase overall clarity and color accuracy. A Zeiss T* anti-reflective coating has also been applied to lens elements to minimize lens flare and ghosting for greater contrast.

Loxia lenses are distinct in that they feature a manual focus design that has been specifically tailored for use with electronic viewfinders, and also feature a manual aperture ring that can be de-clicked for silent operation; making them especially well-suited to filmmaking applications. The all-metal lens barrel incorporates engraved focusing and depth of field scales, and a 90Â° focus throw offers fine-tuned control over focusing position as close as 9.8″ away. Additionally, a weather-resistant gasket is featured at the lens mount to protect the lens-camera interface from dust and moisture.