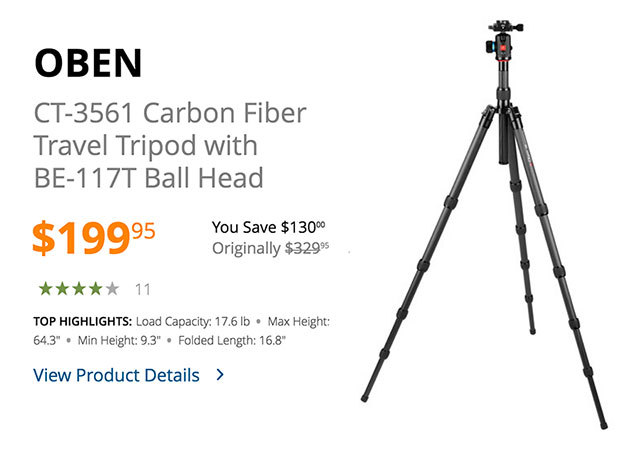 This sturdy yet lightweight tripod is my choice for travel. It features 5-section legs that fold upward 180Â° to create an extremely compact package for transport â€“ with the included head attached, folded length is only 16.8″ – yet with a load capacity of 17.6 lb. For further versatility, one of the legs unscrews from the chassis and attaches to the head & center column to form a working-height monopod.

With the five leg sections and the center column extended, the maximum height of the tripod with the head is 64.3″. The legs are non-rotating, which enables single-handed operation of the rubber twist locks on each leg: One twist of the wrist, and the four leg stages descend. Each leg is independently adjustable, and they can be locked securely at three different angles. The tripod’s feet feature rubber tips that can be removed to reveal metal spikes, allowing you to shoot both indoors and outdoors on any terrain.

To shoot in monopod mode, simply unscrew the leg that forms the base of the monopod, remove the center column from the chassis, and screw these two elements together. With the head & center column mounted on the extended leg, you have a full size monopod that’s even taller than the tripod at full height.