Rebates on Sony a7 series & a9 cameras (Click Here) 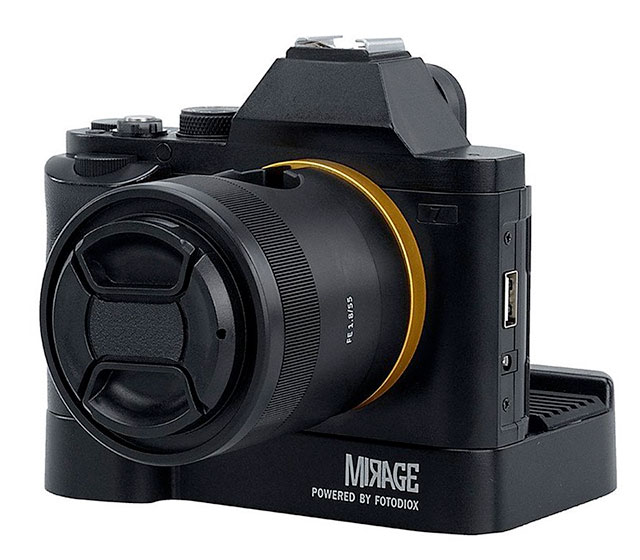 I can’t explain why…but IF you want to charge your smartphone, smartwatch, tablet or other geeky gear with a charging station that looks just like a Sony a7 camera, the new Mirage Trio USB Charging Station ($75 on Amazon) is just the thing for you. 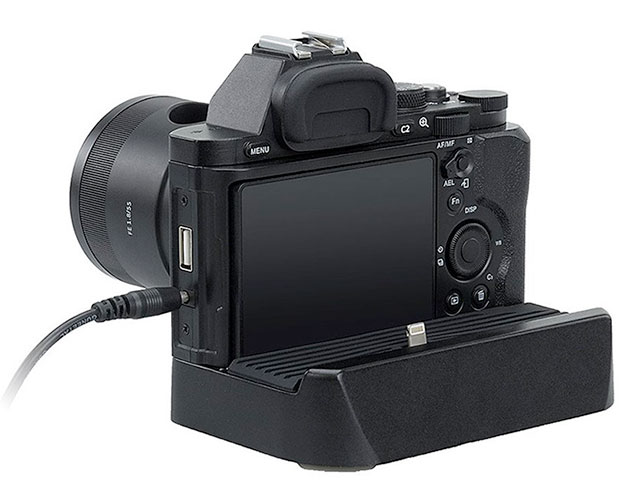 The Mirage Trio USB Charging Station lets you simultaneously charge up to 3 devices, all contained in a handsome Sony a7 camera replica so realistic that you’ll feel you can pick it up and start taking pictures! The main platform can charge Apple Lightning or Android devices, a full-sized USB jack on the side will charge any USB device, and there’s an integrated compartment within the replica lens for an Apple Watch Magnetic Charging Cable (cable not included). 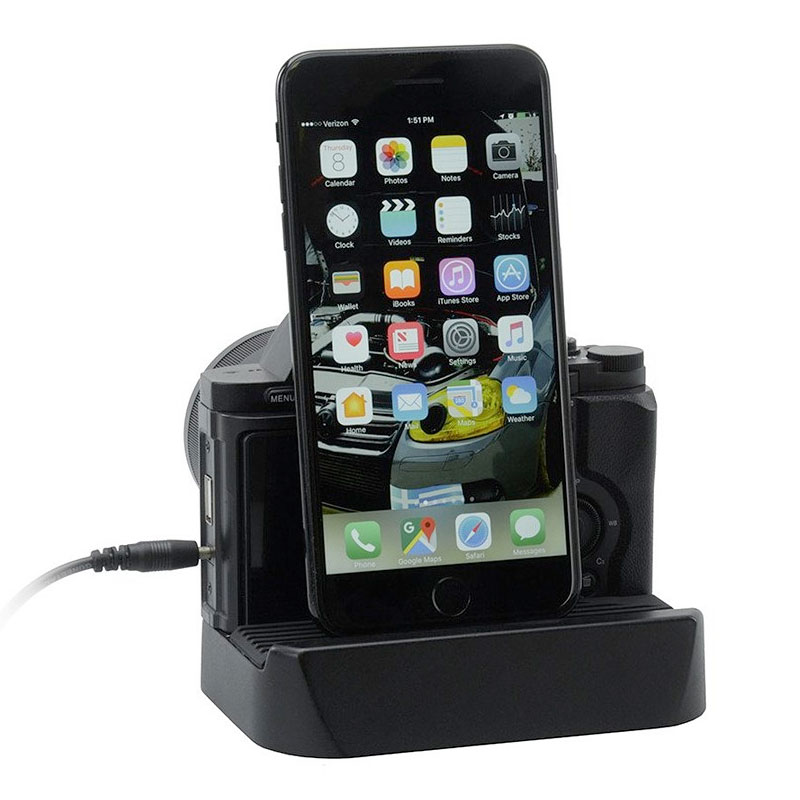 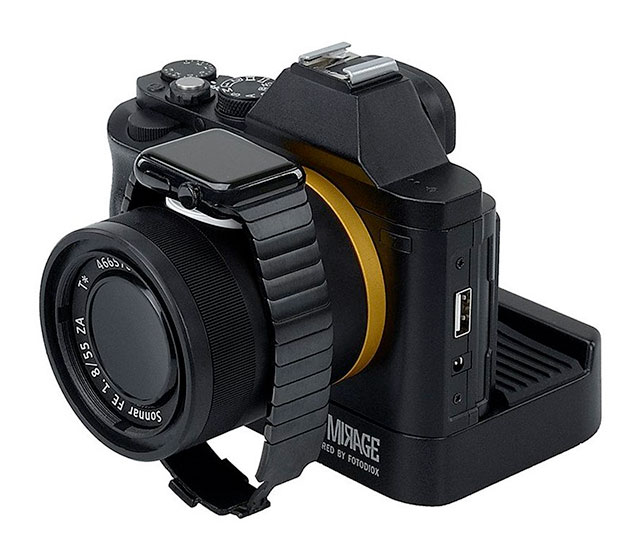 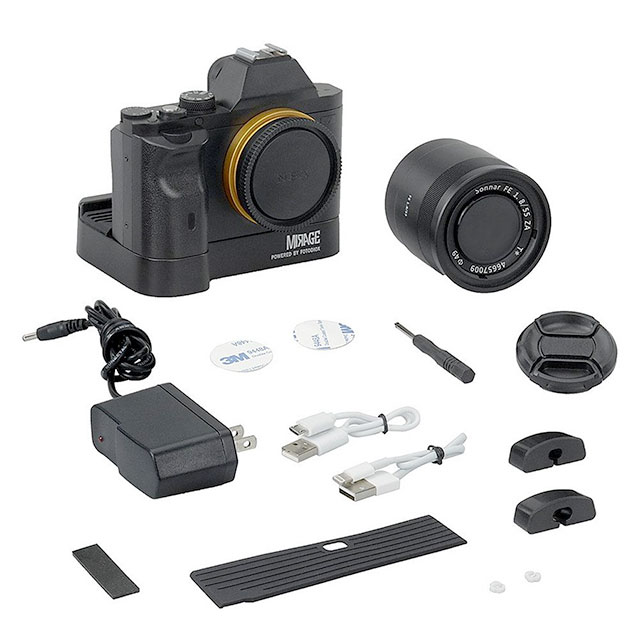 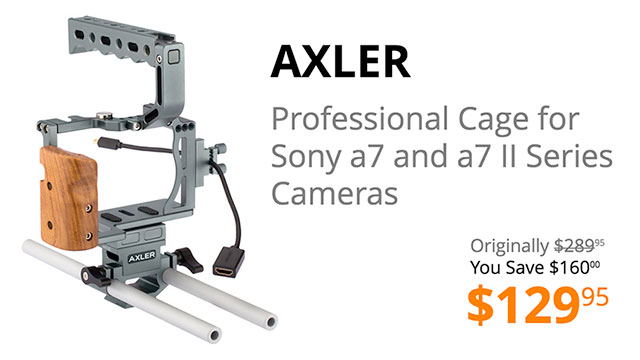 Save $160 Today on Axler Professional Cage for Sony a7 & a7 II Series Cameras – Just $129.95 after Savings! (Click Here). The cage adds stability and protection to your camera, while providing a 15mm rod baseplate and numerous 1/4″-20 and 3/8″-16 mounting points for attaching optional accessories. The cage features a rosewood grip for comfortable handheld shooting and a bolt-on top handle for easy rig handling and carrying on set. For additional accessory mounting, the top handle features two shoe mounts, with a third shoe mount integrated into the top of the cage on the grip side.

Compatible with Sony a7 series and a7 II series cameras, the form-fitting cage maintains access to all camera controls and functionality, including the battery compartment and Multi-Interface Shoe. An HDMI cable clamp ensures that your cable doesn’t accidentally come loose while shooting, cutting off the feed to your external monitor or recorder. It also helps prevent damage to the HDMI port, which is further bolstered by an included micro-HDMI to full-size HDMI adapter cable.

The cage attaches to the included 15mm LWS baseplate using a sliding quick release system, allowing you to remove the camera from the rods when a compact, handheld form is desired. When mounting the cage onto the baseplate, it is secured in place using a rear thumbscrew. For tripod mounting the entire rig, the baseplate features 1/4″-20 and 3/8″-16 threaded holes. A pair of 11.75″ long 15mm rods are included to support an optional follow focus, matte box, or other rod-mounted accessories.

DISCLAIMER: This post contains absolutely zero inside information about the future of fullframe Sony E-mount cameras. ZERO. It’s just a list of things I’d like to see.

Since I’m under Sony NDA, I couldn’t say any of this if I actually knew anything about what’s coming next. But, since I know absolutely nothing, I can tell you what’s on my wishlist…

That should they tell you something about “inside sources” and “leaks”. Either they’re just guessing or they couldn’t talk. Don’t get lost thinking their predictions have any more clairvoyance than Miss Cleo.

But hey, it’s fun to speculate. So here goes my list the top features I’d love to see in the next generation of Sony a7-Series fullframe mirrorless cameras.

Please leave your suggestions in the Comments. 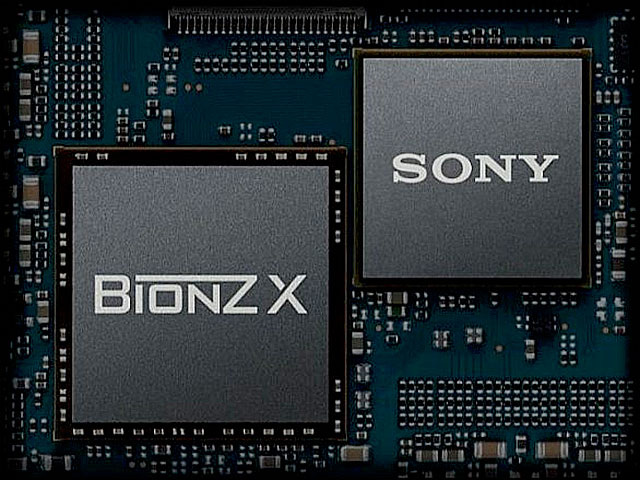 Better performance under the hood tops my wishlist over more megapixels or flashy new features. Adding the LSI Processor and Huge Buffer from Sony a99 II would allow longer continuous bursts, more frames per second, less time waiting for a buffer to clear and quicker image review. Think of it as a Hemi-engine upgrade for Sony’s flagship mirrorless cameras! 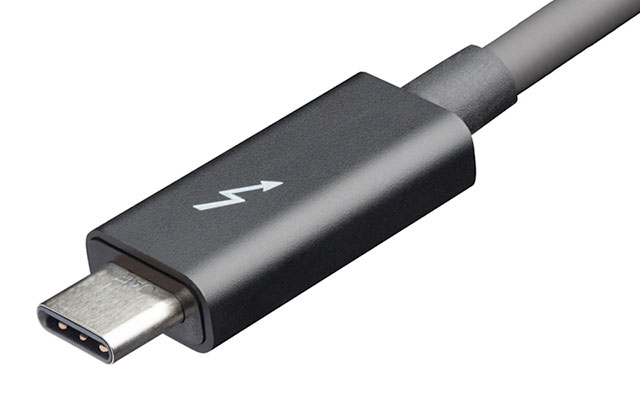 WHAAAAATT??? A Cable Port??? Really??? Yup. There’s nothing sexy about cables and ports. Allow me to explain why you should care. Sony cameras currently use a multi-terminal USB 2 port that BADLY needs an upgrade. Combining Sony mirrorless tech with a USB-2 port is like putting an 8-track in a Ferrari…

Thunderbolt 3 or USB Type-C allow MUCH faster wired tethering – an area Sony currently lags behind the competition. Thereâ€™s no physical difference between Thunderbolt 3 and USB-C ports. Each cable has identical symmetrical plugs on both ends of the cable so thereâ€™s no longer a â€œrightâ€ way to plug them in.

Sony a7-Series cameras currently shoot in 14-bit in single shooting drive mode but down to 12-bit when set to continuous shooting. Adding an LSI and larger buffer should end the need for that which would be great news to my friends who shoot a lot of in Bracket-Continuous mode.

While we’re at it, it’s time to lift the 12-bit restriction for exposures longer than 30 seconds as well. My pal Sony Artisan Thibault Roland averages around THREE MINUTES per exposure and his stunning, timeless images absolutely deserve 14-bits!

Just follow the example set by a6500 and you got it. Done.

Small cameras with big sensors don’t have a lot of air space for cooling, but a better heat sink (even if it adds a few ounces) would be a great update if it reduced over-heating in blazing sun or when shooting 4K. 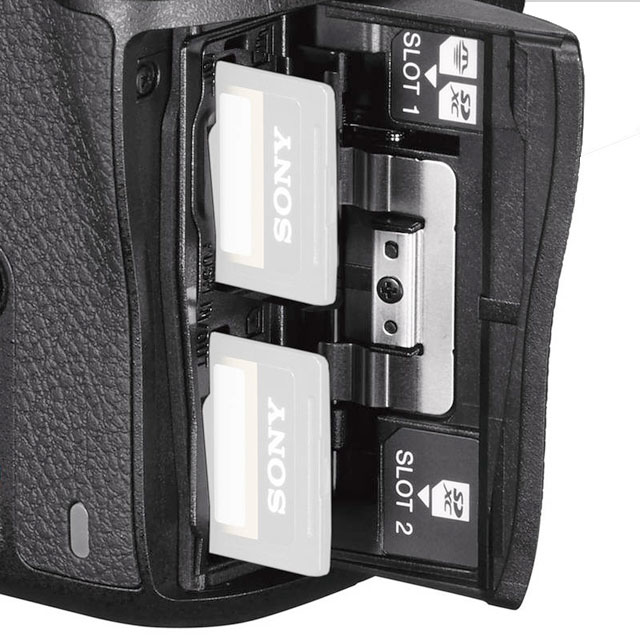 Those of us who started shooting in the film era (in my case for over 30 years) may not see the urgency of demands for dual cards slots. But, enough of you view dual card slots as a Deal-Breaker that Sony should simply follow the words of the gods of Nike and ‘Just Do It!’

P.S. While we’re at it, if the camera is going to have 2 SD card slots, there outta be an option to save Raw to one card and Jpeg to the other or stills to one and video to the other. Just sayin’…

When the Uncompressed Raw option was added for for Sony a7 Mark II cameras, users quickly began to realize why Sony hadn’t offered it to begin with. Sony a7RII Uncompressed RAW files are HUGE! Yet while most of you can’t actually “see” a difference between Compressed and Uncompressed Raw, the idea of any loss bugs some of you. Lossless Compressed Raw would only be about 10% larger than Sony’s Compressed Raw format so it might hit the ideal Goldilocks balance between “too big” and “too small”. 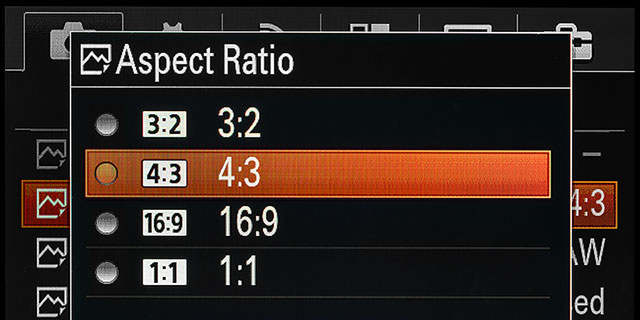 Speaking of 8×10 prints, Sony RX1R II added ‘Multiple Aspect Ratio’ that adds 4:3 and 1:1 crops in addition to the standard 3:2 and 16:9 options. This is a GREAT feature that really needs to make it’s way into the next generation a7-Series cameras. 4:3 hits a sweet spot between 8×10 and 5×7 without making the menu too complicated. 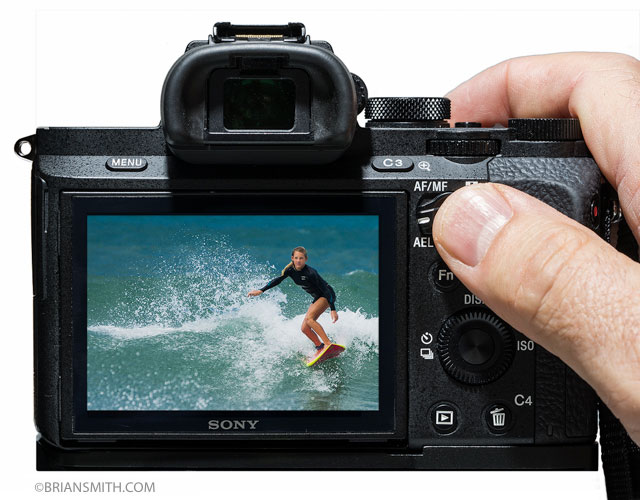 There are four steps required to set up Back-Button AF, but people forget that once they do so, touch focus functions with apps like Smart Remote Control require that you turn AF w/Shutter back on. It would be MUCH easier to add a single “Shutter AF/Back Button AF” menu setting that works with apps no matter which way it’s set. 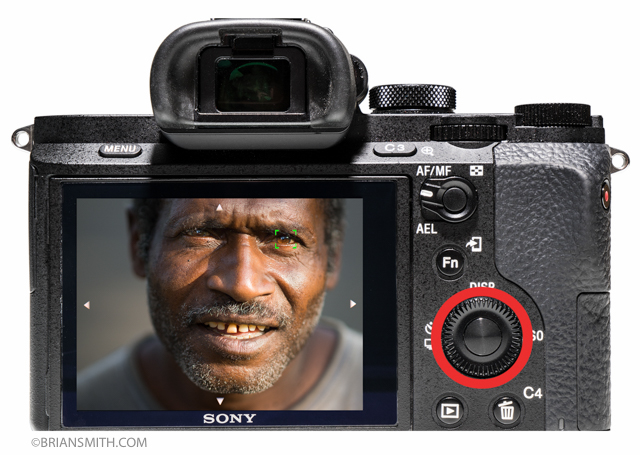 I detailed the steps to allow the Control Wheel to function like a joystick. Two things could make it better:
1. Make the Control Wheel just a bit thicker so it stands out slightly more prominently.
2. Allow focus points to move diagonally – not just up/down and right/left.

The addition of Touch Focus on a6500 for stills and video is a nice moderate compromise between those asking for touch-me-everything vs purists who want touch-nothing.

Most native E-Mount lenses focus at the shooting aperture in order to:
A) Prevent Focus Shift
B) Reduce Shutter Lag as the lens stops down.

I have faith that Sony’s brightest engineering minds can find a way to deal with both issues so we can pull the sunglasses off the sensor. 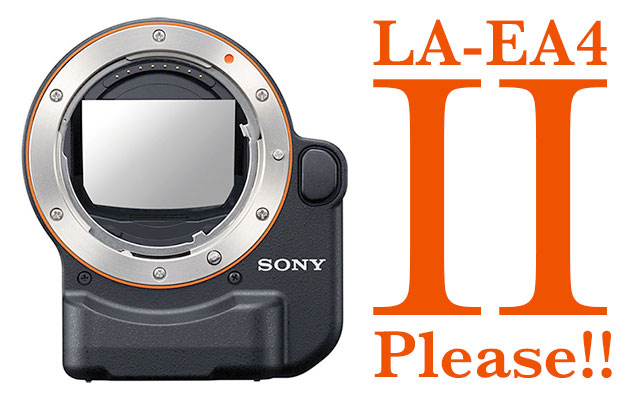 The new Sony a99 II offers the Best AF system on the planet. Its dedicated 79-point PDAF sensor would offer the perfect upgrade for Sonyâ€™s LA-EA4 A-mount lens adapter! It would offer a HUGE leap forward compared to the dated (by Sony standards) 15-point PDAF sensor used in Sony LA-EA4 adapters.

An updated LA-EA4 II Adapter with this 79-point PDAF system could combine with on-chip PDAF sensors of future mirrorless cameras to offer Hybrid AF with Sony A-mount lenses that matches the blazinâ€™ fast AF performance of Sony a99 II.

When tethering, the next gen a7 cameras should have the option to Save RAW both to SD card AND also transfer to PC for Redundancy. Or for Speed, the ability to Save RAW to SD card and only transfer the JPEG for faster review.

Back-illuminated Sensors are expensive, but man do they ROCK at High ISOs! The advantages of a back-illuminated sensor would be well-worth a bump in price.

Time for a7 to join it’s R and S siblings in silence with Silent Shooting Mode. Shhhh….

This is might be easier said than done. Sony “hides” the on-sensor Phase Detection AF points among the photo-diodes and there are quite simply fewer places to “hide” among 12 million pixels than 24 or 42 million.

21. Bring on the New Sony Menus

I’ve played around enough with a6500 and a99 II to say that the new and improved menu system would be a welcome step forward. I put this at the end because I’m assuming this is already fait accompli.

Changing the number from 7 to 9 doesn’t make a camera better. Adding the features listed above does. Isn’t that right, Mister Bond?

It ain’t a point-n-shoot…

I’ve got no issue with megapixels, but don’t add megapixels for the sake of numbers. Sony has been really smart about this choosing 42mp over 50mp since not only does 42mp offer cleaner high ISOs, but it down-samples better for 4K. Only go up in megapixels if there’s a clear reason to do it. The same is true for a7S-Series cameras. Twelve is not an arbitrary number. The current 12.2mp sensor has the EXACT number of pixels needed for pixel-for-pixel 4K without line-skipping or pixel binning.

Don’t Blow Up the Body for a Bigger Battery

Small camera = Small Battery = Small Battery Life. You could absolutely get longer battery life out of the larger Sony NP-FM500H DSLR battery. Should Sony increase the body size just to fit a bigger battery into it? I don’t think so. Sure, Sony NP-FW50 batteries are small, but that also makes it easy to carry a spare. 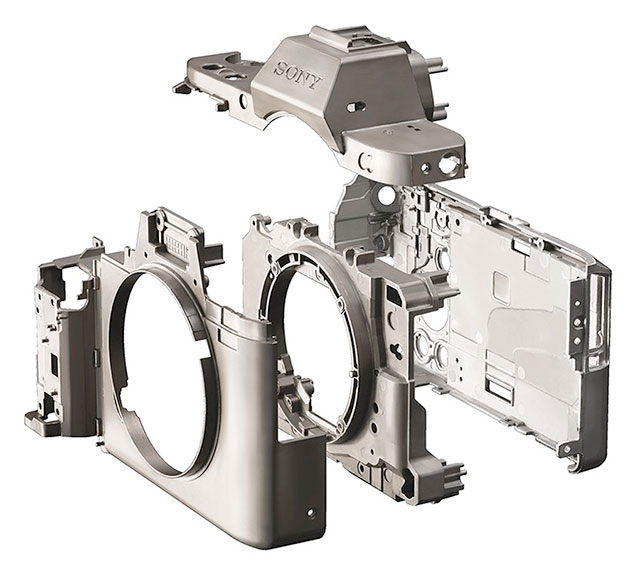 But for those of you who want GPS, I’d expect that, like a99 II, location data could be acquired from mobile devices via Bluetooth and recorded to still images or movies using PlayMemories Mobile app and a compatible smartphone or tablet.

What’s on YOUR Wishlist???

Please leave your suggestions in the Comments section below.