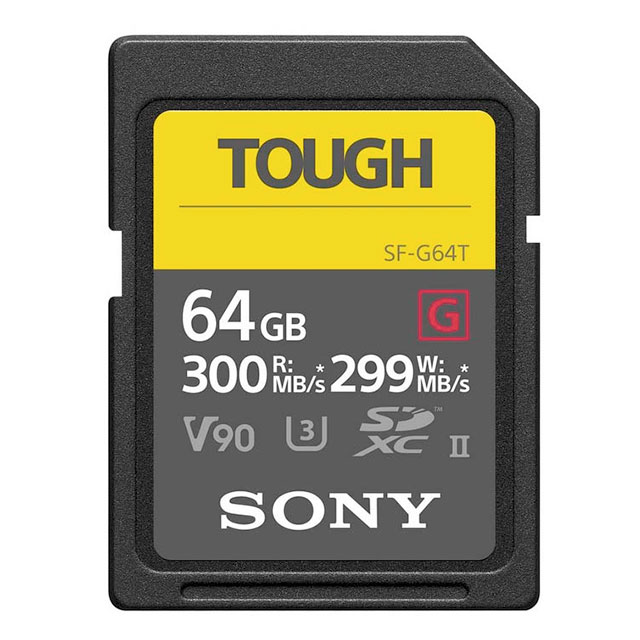 Since they were first released, Sony SF-G SDXC cards are the only cards I use in my Sony a9 & a7R III cameras and they just got tougher! I had a chance to try out one of the new SF-G Tough SDXC cards and I could bend it but couldn’t break it.

The new SF-G series TOUGHspecification range of SD cards are 18 times stronger than the SD standard[ix] with world’s first monolithic structure (one-piece molding, no empty space in the card) and materials of high-grade hardness, unlike conventional SD cards with a thin, 3-part ensemble. They areprotected against typical physical damage that can affect conventional SD cards such as a broken plastic casing, broken data protection lock and broken connector ribs. This has been achieved through a new means that it is the world’s first rib-less SD card with no write protection switch. These developments ensure that the SF-G series TOUGH specification is more resistant to bending and easy to break parts are removed entirely and has been engineered by Sony to deliver the best balance of hardness and toughness. Completely sealed with one-piece molding structure, no waterdrop, dust or dirt is not allowed to come into the card, meeting highest grade of waterproof (IPX8) and dustproof(IP6X).

Unleash the Power of the Camera

In an industry trend, driven by Sony, full-frame mirrorless cameras such as the α9 and α7 series are packing in more and more performance in both stills and video performance. These high-end cameras rely on fast memory cards to maximise their performance and with professional photographers now using SD cards more frequently, users are demanding the levels of reliability and durability associated with other professional card types. With the world’s fastest write speed of up to 299MB/s, buffer clearing time is minimised. This allows the photographer to shoot many frames per second and capture the action that they want. The SF-G series TOUGH specification range also supports V90, the highest standard of video speed class, making it an ideal companion for shooting high resolution video.

Furthermore, transferring high capacity photo and video files is made simple with the SF-G series TOUGH specification, thanks to a read speed of up to 300MB/s. This is another world’s fastest which dramatically enhances workflow efficiency after the shooting is all wrapped up. In a further acknowledgement of the practical needs of photographers, the SF-G series TOUGH specification range feature bright yellow banding design, making the card easier to spot in dark shooting conditions.

SF-G series TOUGHspecification SD cards offer a series of further features, designed to give photographers peace of mind. These include an ‘SD Scan Utility’ which allows the user to check that the card is good condition and File Rescue Software[x] which can recover data and photos that might have accidentally been deleted. Furthermore, SF-G series TOUGH specification SD cards are also X-ray proof, magnet proof, anti-static, temperature proof and feature UV Guard.

The SF-G TOUGH series of memory cards will be available in 32GB, 64GB and 128GB capacities. They will launch in Europe from October. USA pricing is not yet announced but the should sell for slightly more than the current Sony SF-G memory cards

Sony a7 III, a7R III & a9 cameras are compatible with ultra-fast UHS-II SD memory cards in Card Slot 1. But not all UHS-II cars are created equal. Don’t be fooled by the Read Speed – it’s the Write Speed that matters. Memory Cards with faster Write Speeds will clear the buffer more quickly that slower ones.

Which memory cards will give you the best performance?

(Discontinued) Lexar Professional 2000x UHS-II Memory Cards available in 32GB, 64 GB & 128 GB also offer 260 MB/s Max Write Speeds….however Lexar is now out of business, I’d only recommend them if you get an INCREDIBLE deal on close-outs and you can overlook the need for support in the future.

[Please Note: All of these UHS-II memory cards will work in other Sony cameras â€“ however only Sony a9 & a7R III can take advantage of UHS-II blazing fast write speed] 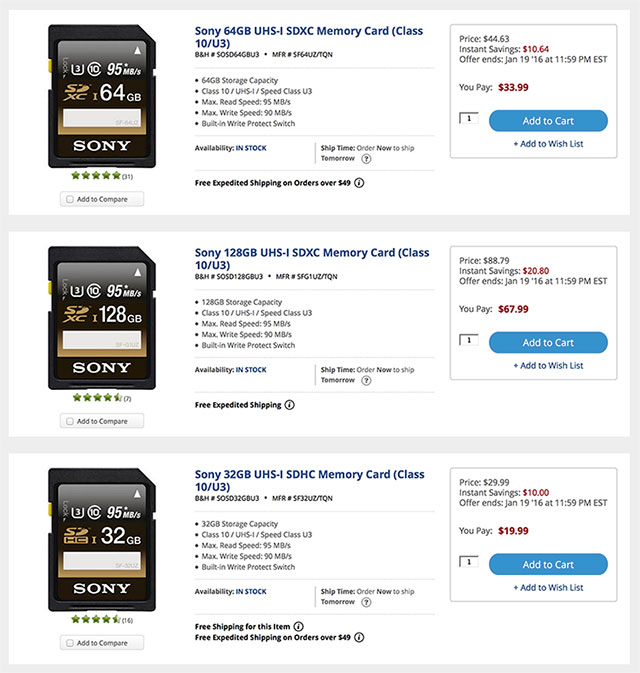 Save Today on Sony SDXC, SDHC and Micro SD Cards including $10 off my favorite Sony 64GB UHS-I (Class 10/U3) SDXC Memory Cards!

Here’s a Great Lightning Deal on my Favorite Memory Cards!

Check out the Amazon Lightning Deal on Sony 32GB SDHC High Speed Memory Cards going on NOW!!! These SHDC High Speed Cards offer rockin fast 95Mb/sec Read and 90Mb/sec Write speeds that allow you to get the best performance out of your digital camera. 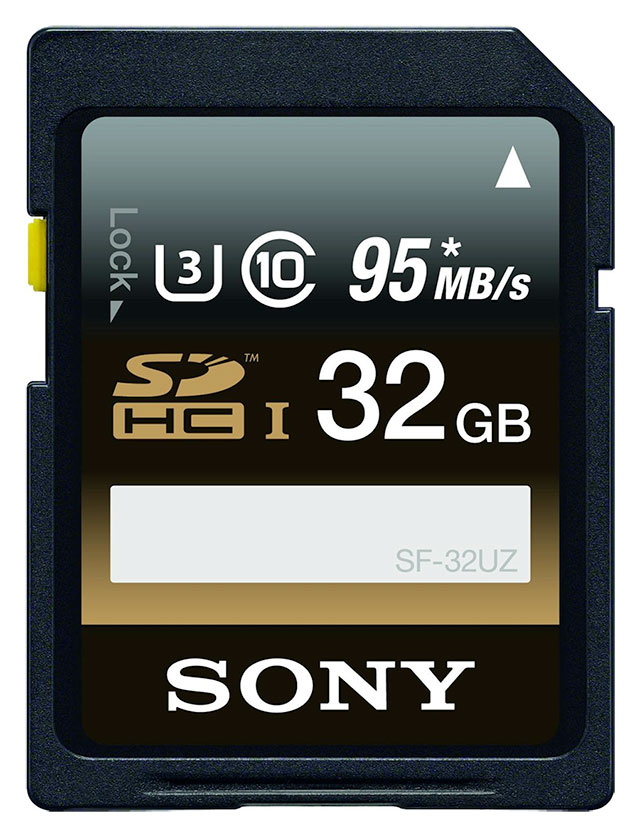 Sony has released new SDHC & SDXC memory cards with enhanced data transfer rates of up to 90 MB/s write speeds for better performance capturing still photos in high-speed burst mode and 4K and HD video content along with up to 95 MB/s read speed to make transferring large files fast and easy.

All these cards are water / dust / X-ray proof, resistant to UV light rays, magnets and static, and capable of withstanding extreme temperatures. Downloadable File Rescue software helps recover photos and videos, including 3D and RAW files, that have been accidentally damaged or deleted. 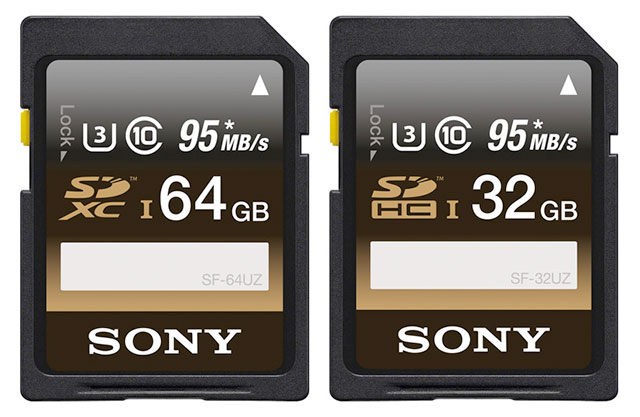 I’m using these cards in my A7, A7R and A7S cameras. They offer outstanding performance and are about 20% lower in price than comparable cards from the competition. 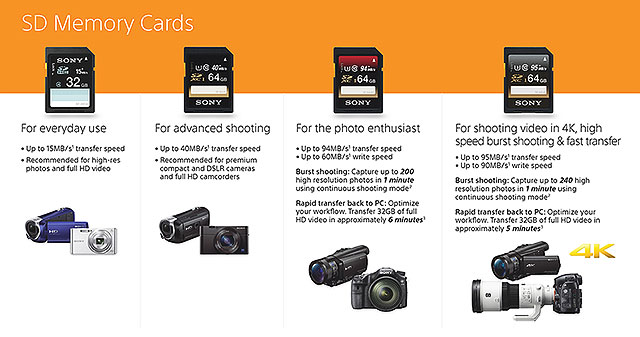 Sony 32gb SDHC UX Class 10 UHS-1 Memory Cards
Unless you really plan to push the limits of burst mode, these cards are a great lower-priced choice for stills. (Order from B&H | Amazon)

Sony 64gb SDXC UX Class 10 UHS-1 Memory Cards
If you plan to shoot video, you may want to buy theses SDXC cards as they will allow you to access XAVC S video format. (Order from B&H | Amazon) 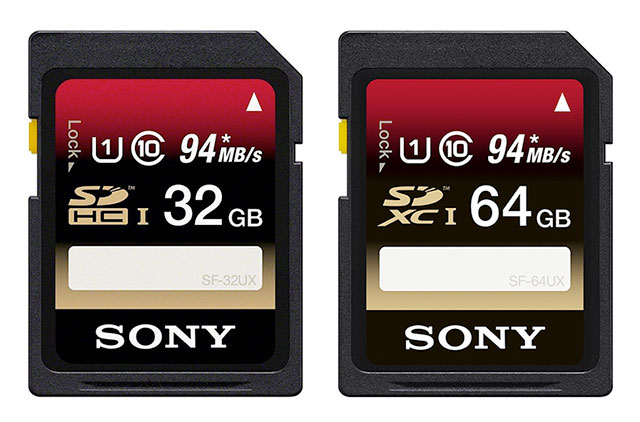