“We have a long and proud history of collaborating with revolutionary companies like Sony, we are working closely with the FX9 camera team to deliver 4K 16bit RAW from the FX9 to our Neon cinema monitor-recorders.” Said Jeromy Young, Atomos Co-founder and CEO.

The FX9, which will go to market towards to end of 2019, features an advanced 6K full-frame sensor and has been designed to give professional shooters greater flexibility and capture capability, making it an ideal match for the Atomos Neon range. The FX9 has the same DNA as the popular VENICE cinema camera making it the ideal music, documentary, drama and event shooting.

“When paired with an Atomos Neon, the FX9 will be one of the most advanced production tools available today. We’re excited to empower content creators and filmmakers at the highest level through our ongoing work with Sony.” Added Young.

Atomos Limited (ASX: AMS) is a global video technology company delivering award-winning, simple to use monitor-recorder content creation products. These products give content creators across the rapidly growing social, pro-video and entertainment markets a faster, higher quality and more affordable production system. The company’s range of products take images directly from the sensor of all major camera manufacturers, then enhance, record and distribute them in high-quality formats for content creation using the major video editing software programs. Since being founded in 2010, Atomos has established strategic relationships with key technology providers within the ecosystem including Apple, Adobe, Sony, Canon, Panasonic, Nikon and JVC Kenwood. Atomos is based in Australia with offices in the USA, Japan, China, UK and Germany and has a worldwide distribution partner network. For more information, visit www.atomos.com 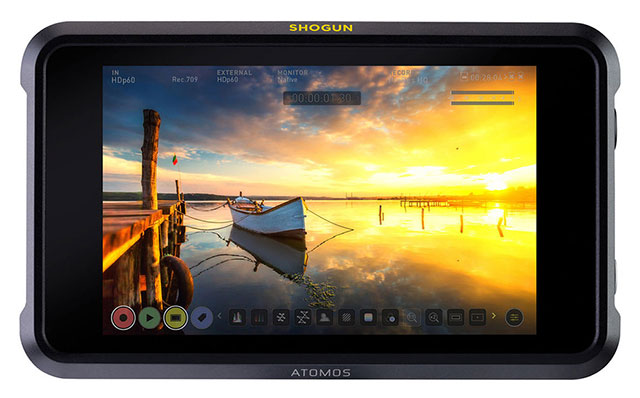 Atomos announces the Shogun 7 (pre-order for $1,499) which like its popular little brother, the Ninja V, offers 4K ProRes Raw recording and much more.

Atomos Shogun 7 is a precision HDR monitor-recorder-switcher designed for the film and video professional. It can be used as either a stand-alone field monitor, recorder and switcher for event, documentary and live in-the-field storytelling; or as a tool for large-scale on-set episodic TV, film and cinema productions where multiple crew members such as focus pullers, grips and cinematographers require a consistent visual reference across the field monitor ecosystem. Shogun 7’s portable size lets you monitor, analyze and tag while on set; and check how your content will look in your audience’s home via real-time Dolby Vision output. With Shogun 7 you’re not locked into any format, camera manufacturer or pipeline. It is a completely flexible master recording and production station.

Monitor, record and switch between 4 live HD SDI video streams and one program stream for flexible in-the-field directing. Enjoy the freedom of asynchronous switching and gen lock in & out to connect to existing infrastructure. Shogun 7 offers up to HDp60 SDI ISOs x 4 recording. Once you’ve finished capturing your streams, just import the Atomos xml file into your NLE and your timeline populates with all your edits in place. Audio is also taken care of, with each ISO and program record, we insert the mixed analog stereo channels and embed 2 channels of digital audio in each recorded stream. The program stream always records the analog feed and switches between audio inputs for the on-camera audio to match the switched feed.

Capturing in 4K is now becoming a requirement for content streaming providers. With the latest HDMI 2.0v you can capture up to 4Kp60 on any available camera, or via Quad Link, Dual Link or Single Link. If slow motion capture is important to your production, Shogun 7 lets you capture 2K up to 240p. You can tag on-the-fly while recording for direct-to-edit look up in Final Cut Pro X, Adobe Premiere* and Avid Media Composer.
* xml conversion may be required

Introducing Dynamic AtomHDR technology, designed by Atomos to yield a 1,000,000:1 screen contrast ratio. With Shogun 7 blacks and colors are rich and deep. Images appear to ‘pop’ with added dimensionality and detail. The incredible Atomos screen uses a unique combination of advanced LED and LCD technologies which together offer deeper, better blacks than rival OLED screens, but with the much higher brightness and vivid color performance of top-end LCDs. Objects appear more lifelike than ever, with complex textures and gradations beautifully revealed. In short, Shogun 7 offers the most detailed window into your image, truly changing the way you create visually.

A new 360 zone backlight is combined with our new screen technology and controlled by the Dynamic AtomHDR engine to show millions of shades of brightness and color, yielding jaw-dropping results. It allows Shogun 7 to display 15+ stops of real dynamic range on-screen. The panel is also incredibly accurate, with ultra-wide color and 105% of DCI-P3 covered. For the first time you can enjoy on-screen the same dynamic range, palette of colors and shades that your camera sensor sees.

The challenge with HDR production is maintaining the creative intent of the production at the time of shooting vs the finished product that is viewed on devices and TVs. Atomos and Dolby have teamed up to give you Dolby Vision live HDMI out, in real-time, from any SDI or HDMI HDR camera. All courtesy of AtomOS 10.

Simply connect your Dolby Vision capable TV or monitor to your Shogun 7 or Ninja V and magically, automatically, the AtomOS analyses the image, queries the TV, and applies the right color and brightness profiles for the maximum HDR image on the display or TV. This ensures the HDR image always looks – as it was creatively intended by the creator. This is a valuable on-set reference check for the creative director and client.

This function is also available in playback and playout from RAW and Log recorded ProRes RAW, ProRes and DNx rushes for instant time-saving, on-set and in-studio review. Utilise playback functions like slow motion, and insert edit and in and out points to speed up playlist compilation.

AtomOS 10 includes a redesigned touch user interface for improved HDR image viewing via our Dynamic AtomHDR engine. It allows for accurate set up and one-touch operation, a complete suit of scopes, exposure, zoom, calibration and focus tools to ensure a great recording every time.

A recording isn’t complete until checked. Shogun 7 allows instant playback, slow motion and frame-by-frame analysis for immediate HDR review either on-screen or out to any Dolby Vision capable TV or monitor, playing out SDR is just as easy, you can even review them side by side.

Capturing ProRes RAW video with Shogun 7 unlocks the true potential of your RAW cinema camera and provides complete control of your video image at the highest quality possible. The maximum dynamic range, color accuracy and detail are preserved, while at the same time every aspect of the video image can be controlled with precision for maximum creativity. Colors can be easily matched and the extra information means footage can be easily be manipulated in post-production, which is especially useful for grading and VFX shots.

Shorten the gap between capture and final edit with AtomOS real-time production tools and functions. Monitor analyze and tag shots, making the most of portability while being on the go. Record direct to the desired NLE editing/grading/transcoding formats; from camera to standard industry finishing workflows, enjoy support for Apple Final Cut Pro, Avid Media Composer and Adobe Premiere. With the new ProRes RAW metadata functions, never lose sight and have peace of mind in post-production. Playback rushes on-set on-device to the best quality display or to a TV with full Dolby Vision support. 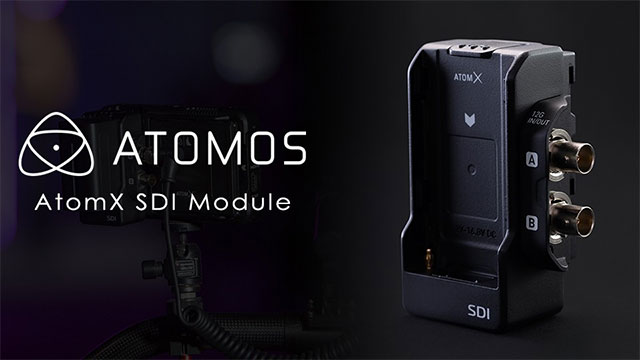 Atomos announced the AtomX SDI Module ($199 from B&H Photo) for their Ninja V 5″ Monitor/Recorder which allows recording and output of 4K60 video over a 12G-SDI connection. The module docks in the modular expansion port, located in the Ninja’s battery slot, and has two user-configurable 12G-SDI ports.

The AtomX provides numerous playback options including HDR. The AtomX passes power from an L-series battery to your Ninja V without significantly increasing the footprint of your Ninja V. 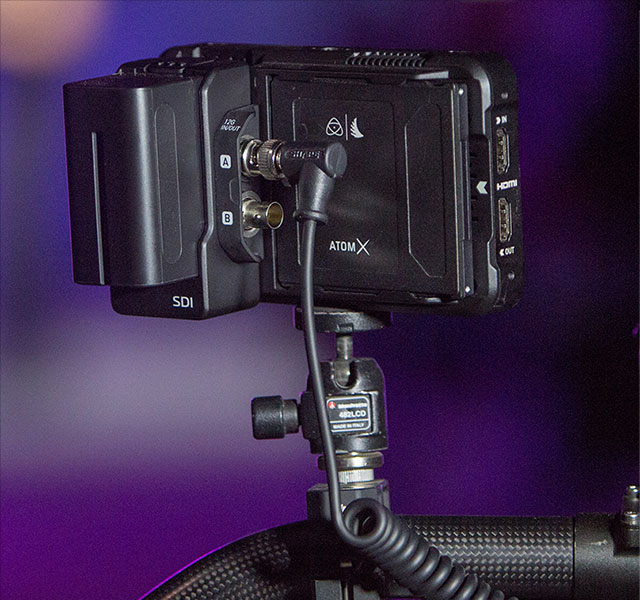 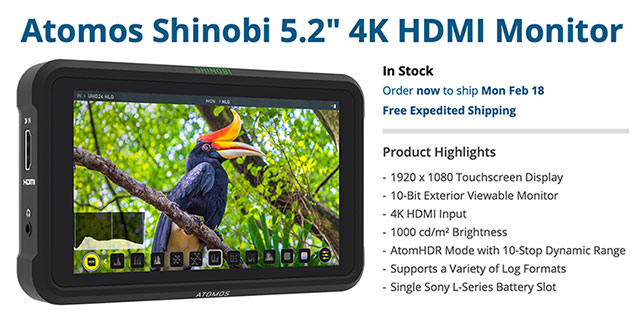 Shinobi features a 10-bit FRC IPS screen with a brightness of 1000 cd/m², which makes it suitable for use in both exterior and interior conditions. The AtomHDR display technology allows you to accurately monitor your log gamma footage without having to view flat, washed-out looking images or use a LUT to compress the dynamic range and color space. 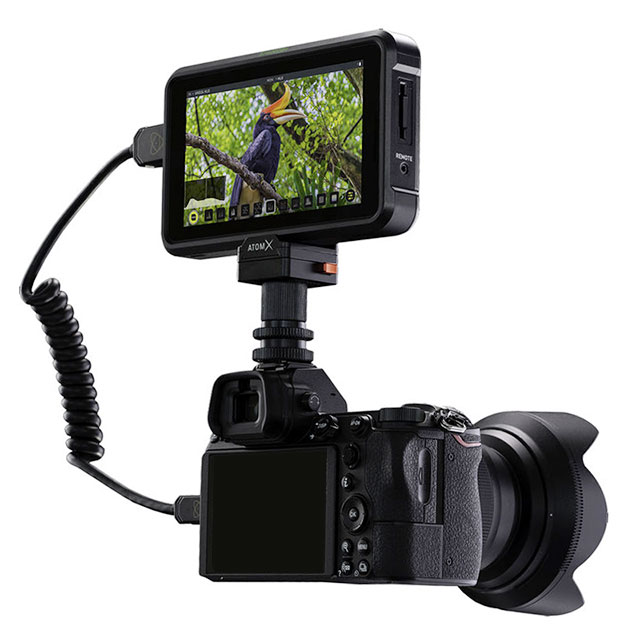 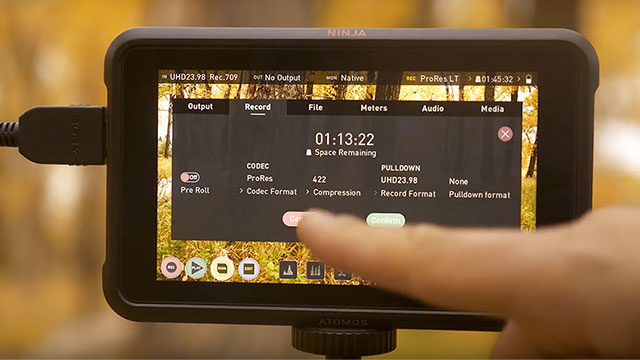 DPReview TV’s Atomos Ninja V 5″ 4K HDMI recording monitor review explains why it might just be one of the most useful tools for video shooters and VLoggers. Because of its compact size yet robust construction, this is definitely a product Sony mirrorless cameras. Great useful info as always from Chris Niccolls and Jordan Drake.