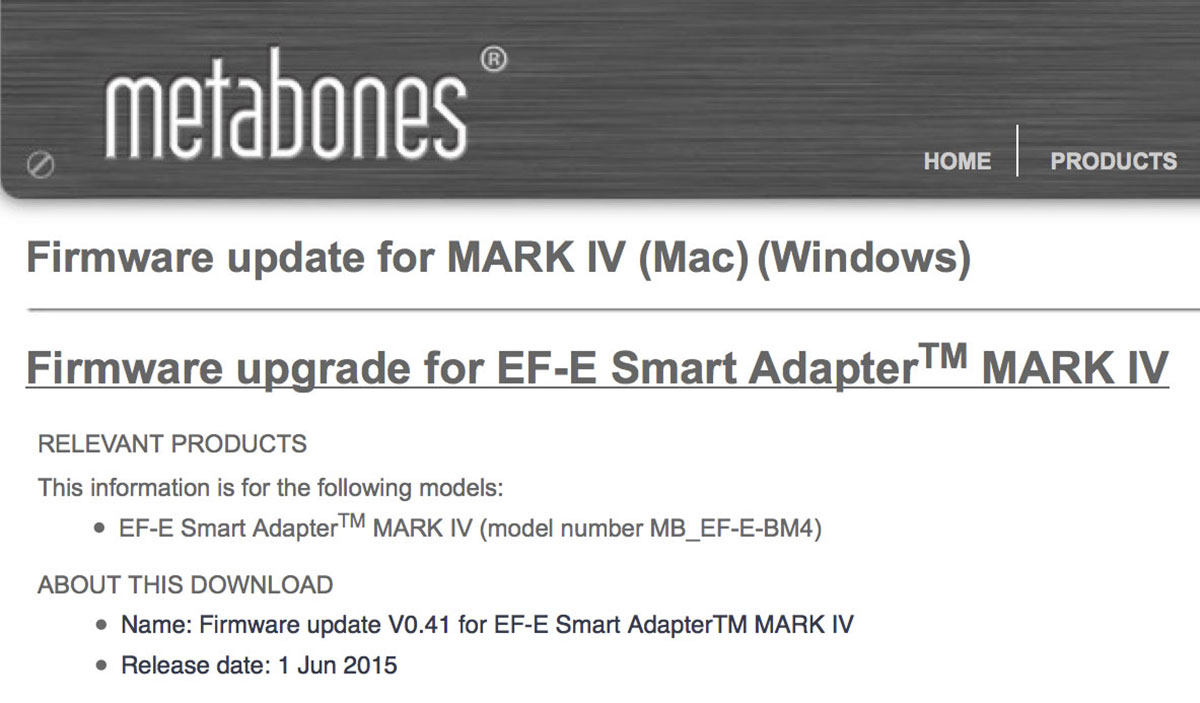 [Update: After testing this update on Sony a7II and a7RII, I STRONGLY recommend this FW update for Sony a7II/a7RII]

Metabones has released Firmware Update 0.41 for their Metabones Smart Adapter IV (Order here). This is a major firmware update for Sony a7II and a7RII because it addresses incompatibility issues between Canon IS lenses and Sony a7II camera IBIS. Prior to this firmware update, Metabones Smart Adapter IV (and other Canon smart adapters) would over-compensate for image shake by using both Canon lens IS and camera IBIS.

With this update, users can use the lens IS switch to choose between using lens-based optical Image Stabilization and Sony a7II / a7RII IBIS:

All Metabones Smart Adapter IV users will want to run this firmware update since it also adds autofocus support for some additional Canon legacy lenses on Sony E-Mount cameras including Sony a7, a7R, a7S, a7II, a6000, a5100, a5000 and NEX.

ABOUT THE LATEST UPDATE

• User may choose between lens OIS and IBIS using the lens’ IS switch (except for some Tamron lenses). If the lens’ IS switch is ON, lens OIS is used and IBIS is turned off automatically. If lens’ IS switch is OFF, IBIS is used instead. To turn off all IS, hold down the WO button on the adapter while switching the lens’ IS to the OFF position.
• IS is always turned on during magnified focus assist for ease of manual focusing
• Added autofocus support for some legacy lenses on A7 series
• Eliminates iris flicker when opening up the iris from a slower aperture to a faster aperture in Green mode on FS series, NEX-VG series and A7 series in movie mode.
• Eliminates iris tick noise while zooming a variable aperture zoom lens in Green mode

• Once the file has downloaded successfully, you’re ready to upgrade the Firmware update for the Smart Adapter MARK IV.
• Close all currently running programs on your computer.
• Double-click the [MAC: MetabonesApp.dmg] or [WIN: MetabonesApp.exe] download file to start the Metabones App.
• Connect your the Smart Adapter MARK IV to the computer by using the USB-MicroUSB cable that came with your Sony camera to USB port behind the adapter’s lens release lever.
• Then, follow the instructions in the Metabones App to update the firmware.

PLEASE NOTE: I strongly advise using the USB-MicroUSB cable supplied with your Sony camera as other cables may not transfer data properly.

Sony A7 Series: From Snapshots to Great Shots’ is available NOW from Amazon