I’ll be presenting an all-new portrait lighting seminar at PhotoPlus Expo this fall. Expanding upon the lighting portions of my talk and book Secrets of Great Portrait Photography, this seminar will focus on how to master light. This is my third year speaking at PhotoPlus, but I’ve been attending for the past 20. Every time I’m asked to speak, I start with one single thought, “would I shell out money to sit through this talk?” With that in mind I’ve crammed two hours with all the lighting tips and tricks I wish someone told me about lighting when I was starting out. I’ll break down many of my favorite celebrity portrait shoots to show you how we lit them – but more importantly why I lit them the way I did. Come eager to learn ways to use light to get the look you want and to make everyone you photograph look and feel like a star.

Mastering great portrait lighting begins with a simple understanding how to control what light reveals and shadows hide. The best way to understand how to control and shape light is to first break lighting down to a few simple principles beginning with an understanding of how light can create drama and enhance the mood. Celebrity portrait photographer Brian Smith shares his use of lighting modifiers to control and shape light and shadow to create bold iconic portraits of Hollywood’s A-list. You’ll learn how to work quickly under pressure, on productions both small and large. Learn how to control the quality of light had how the choice between hard light and soft light allows you to control the mood. From his simple problem-solving approach to both sculpting light in the studio and how to overcome harsh daylight by blending strobe with ambient light to on location, you’ll learn how to take cues from reality make the most of great light when you find it and to create it when you don’t. Smith will share celebrity portraits of from his books ART & SOUL and SECRETS OF GREAT PORTRAIT PHOTOGRAPHY to share ways that you can make everyone you photograph look and feel like a star. 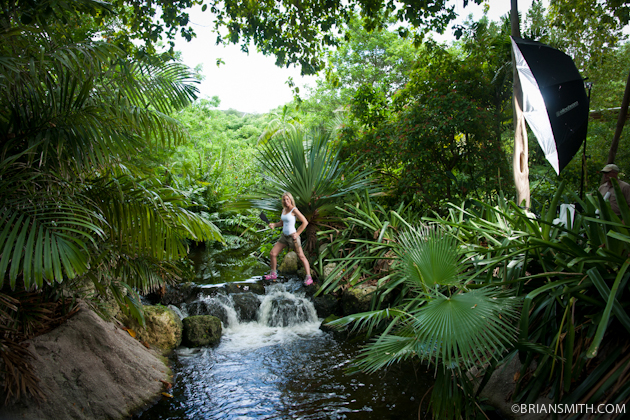 Portrait photographer Brian Smith shares his thoughts as a Lowepro Featured Photographer on location shooting, approaching public figures, and the art of getting comfortable with the subject in our exclusive Lowepro video profile on Vimeo.

What Makes You Click? Q & A with Miami Pulitzer Prize-Winning Photographer Brian Smith

Back in the day, when shooting on film for the Miami Herald, photographers often made film runs for each other to meet deadline. The photographer would continue shooting while the first batch of Tri-X would get processed in our lab. On this day I made a run for Brian Smith at a late night press conference. There was Brian all set up with light stands and his portable Norman 200Bs on either side of the makeshift platform assembled for the speaker. I was amazed at how he would go through so much trouble to light up such a mundane event. No one else was doing it.

Q; Brian, what motivates you to strive for the extraordinary in your work?

It’s probably just my mid-western work ethic showing through. If you’re going to do something – do it well.

Q; Who influenced you most in your career?

There are a lot of photographers who I look up to for different reasons. Gregory Heisler was a mentor for his expertise in lighting and the thought he puts into his portraits. George Hurrell and Irving Penn were two of my favorite portrait photographers. No one has ever captured Hollywood glamour better than Hurrell and Penn’s portraiture continued to evolve through his remarkable career. Elliott Erwitt’s photographs prove that photography is a great way to share a smile. Elliott loves what he does and it shows in every photograph he takes.

Q; You travel for days at a time and work long hours including weekends. So often that puts a strain on a marriage. How do you balance your busy schedule and family life with Fazia?

I’ve been extremely lucky to be able to work and travel with my wife Fazia for the past 20 years. You really need a crew on most portrait shoots and she’s so versatile that she can do anything from hair & make-up to styling to production on our shoots allowing us to work and travel together as we collaborate on everything.

Q; What is your relationship with Sony and why?

I’m one of seven photographers in Sony’s Artisans of Imagery program. We speak at schools and trade shows around the country. Sony approached me when they were developing their pro a900 camera. They gave me their previous camera and asked for feedback. I was blown away by the quality of their Zeiss lenses, so I gave them a list of what I thought should be included in the new camera. When the new camera came out with all the stuff I asked for I was even more impressed that they asked what they should do next.

Q; You have a talent for impersonations, has that ever helped you put a subject at ease?

Getting your subjects to laugh can really help the mood of a shoot, but since many of the people I shoot make people laugh for a living, I never try to upstage a professional. Of course it’s a huge compliment when you make a comedian crack up.

Q: How did you begin to conceptualize the ART & SOUL book project?

Kayla Lindquist of Sony approached me with the idea for ART & SOUL which was to partner with The Creative Coalition to photograph stars during Oscars Week 2009 and get them to write in a journal something about what the arts means to them. From our very first shoot of Tim Daly we realized we’d struck gold. So we just kept shooting and building upon the idea. When an incredible great project gets dropped in your lap, you’ve simply got to take it all the way.

Q; Start to finish, how long did it take you to complete the book?

Q: Did all your photo sessions for the book go as planned?

Better than I could have possibly imagined. There was something really special about this project from the very start. Because the project was about the arts, so we naturally focused upon that first defining moment when the arts clicked for them. Even the most celebrated star were transported back to their first school play when their biggest stage was shared with school assemblies and their entourage and stretch limo were their friends in the back of mom’s minivan.

Q: Regarding photography equipment used for ART & SOUL, what’s in the bag?

Q: What’s your advice for a young photographer?

Learn to work with people. If you’re going to be a photographer you have to know how to work with people. The best advice I was ever given was to go out and shoot portraits of 50 strangers that reveled something about who they were. It’s an exercise that I’ve done throughout my career.

Q: Do you always hang out at nudist colonies?

Just for work…the true joy of portrait photography is meeting all types of people and finding a way to tell their stories. Sports Illustrated called with the best words a photographer can ever hear are “We have a shoot that is perfect for you..” the only way that get’s better is if their next words are “Nudist Golf…”

Brian will be a guest speaker and available for book signing at:

Art & Soul: Stars Unite to Celebrate and Support the Arts
By Brian Smith and Robin Bronk

ART & SOUL is a large-format glossy coffee-table book, featuring intimate portraits of celebrities from the entertainment industry including film, television, music and stage. The stunning images, shot by Pulitzer prize-winning photographer Brian Smith, are accompanied by personal testimonials from each artist expressing the importance of the arts in our culture and the positive impact it has on our lives.

The notes – in each artist’s own handwriting – range from whimsical to weighty, but all offer insight into the individual’s background and how their lives were shaped by art.

The book is created in partnership with The Creative Coalition, the premier public advocacy charity, founded by prominent figures in the entertainment industry. It is an important part of a campaign to focus national attention on the need to ensure that arts in America thrive and flourish.

Q: I really admire your work, so I thought you would be a good person to get your thoughts on Sony. I recently purchased a Sony a850. I’m very pleased with so far. I am primarily a portrait photographer and I’m planning on getting 85 f1.4 CZ next. Would you recommend this lens and which other CZ lens would recommend?
Best Regards,
Phil Sheridan
P.S. I share your admiration for Jack LaLane.

A: That’s a great combination. The CZ 85 1.4 is a favorite lens of mine – definitely the sharpest 85 I’ve ever used. Other great choices for portrait photography are the CZ 135 1.8 and Sony’s 100/2.8 Macro is also incredibly sharp and just the lens for really tight portraits.But my personal favorite CZ 24-70/2.8 since I tend to shoot a LOT of portraits in the 50-70mm range just to have a bit more intimate feel. The 24-28mm range on that lens is perfect for environmental portraits like the portraits of Jack LaLanne.