Save $70 today on the handheld gimbal stabilizer perfectly sized for mirrorless cameras. Zhiyun-Tech WEEBILL-S incorporates the underslung mode design of its predecessor, the WEEBILL LAB, and also has a more compact form as well as other new features. The sling mode design consists of a handle on the rear that allows for easy switching to underslung mode as well as better handling in all other modes. Other improvements include upgraded motors and stabilization algorithm. The WEEBILL-S features 300% more motor torque and 50% more responsiveness.

WEEBILL-S offers six modes of operation. These include Full-Range POV Mode, which allows 360° synchronous movement on all three axes, and Vortex Mode, which lets you achieve 360° barrel shots. Please see the Features section below for a description of all six modes. Other features of the gimbal include Intelligent Auto-Tune, which automatically recognizes the weight of your camera and adapts to the weight to provide the best power efficiency possible. The battery operating time of the WEEBILL-S has also been increased to up to 14 hours.

WEEBILL-S comes with multiple accessories, including an Arca Swiss/Manfrotto dual-layer quick release plate and a storage case. Also included is a mini tripod that can be used as a stand or an extension handle. The mini tripod is also what completes the gimbal for underslung, low-mode operation. It attaches to the rear handle to function as an overhead handle

Today Only! Save 50% on Zhiyun Tech Crane 3 Lab Stabilizer 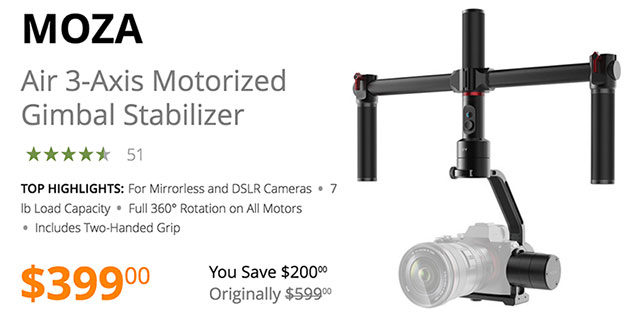 With a 7-pound payload capacity, Moza Air 3-Axis Motorized Gimbal Stabilizer can stabilize your mirrorless or DSLR camera for smooth, professional-looking footage. Since the Air can be used in either one or two-handed configurations, supporting setups that approach the payload capacity won’t sacrifice usability. The built-in handgrip control offers directional control and mode selection at your fingertips.

Other control options include using the free smartphone app or the separately available Wireless Thumb Controller. The Thumb Controller is especially useful in the two-handed configuration.

Auto-tuning can be done through the app to ensure optimal performance. The MOZA Air itself and the included batteries, charger, cables, and accessories all fit in the included hard carry case for convenient storage and transport.

Here’s a Great Deal on gimbal stabilizers for mirrorless cameras! Save up to $270 on Zhiyun-Tech Crane v2 3-Axis Handheld Gimbal Stabilizers. Today Only! 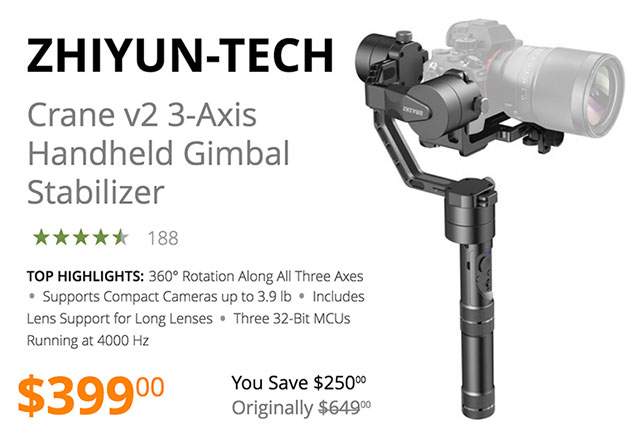