HUGE THANKS to Ab “Scorsese” Sesay of the MAC Group for this fantastic behind-the-scenes look of my shoot with Burlesque dancers Angie Pontani, Amber Ray, Gal Friday, Jo Boobs Weldon, Peekaboo Pointe, Darlinda Just Darlinda and Bunny Love the latest additions to my Legends of Burlesque project which dates back to a 1993 shoot of Burlesque Legend Dixie Evans.

Great to see Angie, Darlinda and Jo again. Last June, we shot Angie rockin’ her Tiara as the reining Miss Exotic World and Darlinda as half of the fabulous Schlepp Sisters sporting rollergirl chic. Great to have a bit of one-on-one time with Jo since normally when I see her, she’s always working and I was always shooting, and she did a great job wrangling all our dancers. Gal Friday was glitterrific. Special thanks to the one-and-only Satan’s Angel for sending lovely Amber Ray our way!

by Jo “Boobs” Weldon, Founder and Headmistress of the New York School of Burlesque. 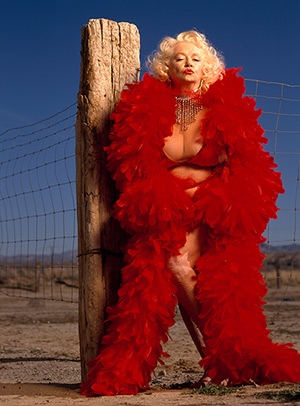 Q. How did you become interested in photographing burlesque and what was the first burlesque photo you took?

After a decade of shooting Olympics, Superbowls, NBA FInals and conflict in Haiti, I was transitioning into shooting celebrity portrait photography for magazines like Rolling Stone, GQ and Esquire. One day I was watching CNN and I saw an interview with Dixie Evans and I think how great it would be to photograph someone like her. Well you can either just sit around and wait for something like that to happen or you can just go out and do it. So I called Dixie up and she said, she’d love to be photographed. So the next time I was shooting in LA, my wife Fazia and I headed out Route 66 to Helendale and spent an absolutely wonderful afternoon photographing Dixie. It was the kind of afternoon that can’t possibly better…until Dixie says it’s too bad that we missed all her friends who’ll be coming out next month. All of a sudden our great shoot just got better…

Q. What was it like the first time you photographed at Exotic World?

We came back to Helendale a couple months later to shoot our first Burlesque Reunion. My wife and I met burlesque legend Tempest Storm when we were checking into our hotel and quickly became friends. Over at Dixie’s ranch, I began looking at the rows of publicity photos by ‘Bruno of Hollywood’ and was struck by how much they looked like the great Hollywood photos of the 30s and 40s. I realized I had a chance to put the burlesque legends back into the spotlight where they belonged. 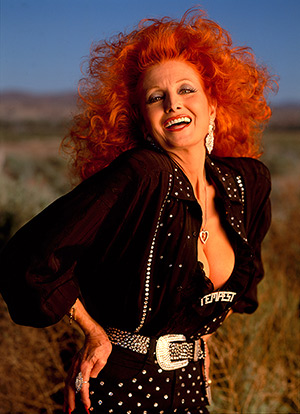 Q. What about burlesque has held your interest for so long?

Like Jazz, Burlesque is a pure American art form. Burlesque is Americana. I started shooting it because I didn’t want to see a part of Americana fade away. I’m overjoyed to see burlesque alive and flourishing today.

Q. What are some of your favorite photos from this project?

That first shoot of Dixie will always be a favorite, you know what people always say about your first… Back in the early days, we always shot the legends outside – either in the desert or where they lived. We went to Long Beach to shoot Jeannine “The Eyeful Tower” France. She didn’t really have any costumes left and while she was happy to shoot in her bra, she didn’t want stand outside in her neighborhood like the crazy old lady in her underwear. So I ended up her in her kitchen with a statue of the Virgin Mary in the background, At first, I didn’t even show the photo since it was so different from everything else, but over the years it’s become on of my favorites. There is something about it that’s really sad and it just breaks my heart.

Q. What do you find to be some of the most interesting aspects of shooting burlesque? 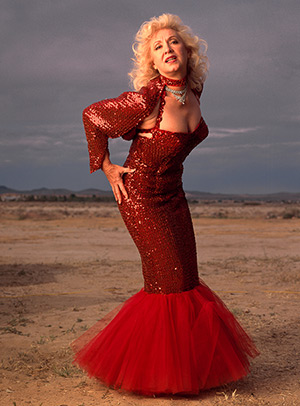 The first time we met Dee Milo, I saw her standing in her red sequin dress and I showed her some of the photos we’d done. She was just about to go on stage, but said she’d do a shoot once she finished her act. So she comes right off stage straight to us in her g-string and pasties and says she was ready. I asked her to put her red dress back on and that was probably the first time in recorded history that a photographer talked a pretty lady back into her clothes…

Q. How does it compare with shooting celebrities, live sports or nude golf?

The greatest thing about being a photographer is dropping into the lives of all kinds of people from different backgrounds for a few minutes or hours. I can’t think of a better way to learn about the world around you.

One of the projects I’ve been shooting over the past year is an arts advocacy project called ‘Art & Soul’. I’ve photographed portraits of over 250 celebrities from the entertainment industry for a book I’m doing with The Creative Coalition that will pair my portraits of celebrities with their hand-written testimonials about the importance of the arts. We just had a sneak preview exhibit of the photographs at the Library of Congress as part of a star-studded evening that included live performances by Adrian Grenier, Patricia Arquette, Spike Lee, Dana Delany, Tim Daly, Steven Weber, Gloria Ruben, CCH Pounder, Cheryl Hines, Omar Epps and Marlon Wayans.

Photographing that project is similar in many ways to the portraits we shot backstage at the Burlesque Hall of Fame Weekend. Even if you only have a few minutes with someone, you have to find a way to capture their personality. Shooting Nude Golf shoot for Sports Illustrated was really a hoot and it reminded me a lot of the early burlesque shoots because the people were so much fun. We all laughed together and had a wonderful time. 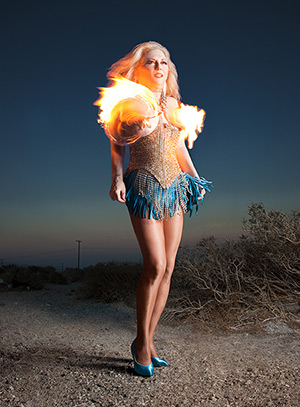 Q. Who have you shot lately?

We shot Satan’s Angel doing her fire act on stage at Exotic World, but you can’t really contain someone like Angel to a stage. So we told Angel we wanted to come out to Palm Springs to photograph her the next time we were in LA. Later that summer we were in LA to shoot of one of Vincent Katheiser of ‘Mad Men’ and so I called Angel to see if she was up to twirl fire for us and she said “sure, c’mon out.”

Well July in Palm Springs is like 120 degrees in the shade but Angel was game to give it a go, so I discovered that the only thing hotter than Palm Springs in July is a burlesque dancer twirling tassels of fire.

I wish we’d started earlier. We missed a lot of legends. My wife and I became fascinated Lili St Cyr. The vintage photographs of Lili are amazing. We tried everything we could to photograph her, even Dixie reached out but we sadly couldn’t ever get her to say yes. I think she wanted to be remembered the way she looked in her prime. I wish we could have convinced her that she’d still be just as beautiful in our eyes.

Q. Do you think you’ll continue to photograph burlesque?

Burlesque is so much fun to shoot that’s kind of like asking if you want to continue to enjoy living, isn’t it?