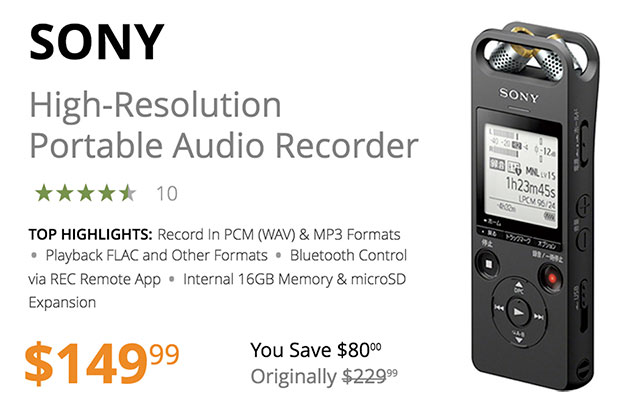 Sony ICD-SX2000 High-Resolution Digital Voice Recorder has 16GB of internal memory and can capture up to 636 hours of MP3 recordings. Additional storage can be provided via its microSD memory slot and optional memory cards. With the REC remote app, the device can be controlled wirelessly from your Android or iOS device over Bluetooth.

The recorder has two adjustable microphones, allowing you to capture stereo recordings in a variety of placements. Three settings include Zoom (for situations including business meetings), XY (for things like band rehearsals), and Wide Stereo (for recording outdoors). You can adjust the sensitivity of the microphones in a variety of different ways, and set the device to record only when it hears noise above a certain level; in such a manner, the recorder can be voice-activated.

The ICD-SX2000 can record in WAV or MP3 formats, and can play many different kinds of filesâ€”it even sports FLAC playback support. You can play audio through the unit’s built-in speaker or over headphones. You can also plug a microphone into its 3.5mm input jack. To eliminate the need for cables, the device sports a retractable USB plug, which you can use to plug directly into computers.