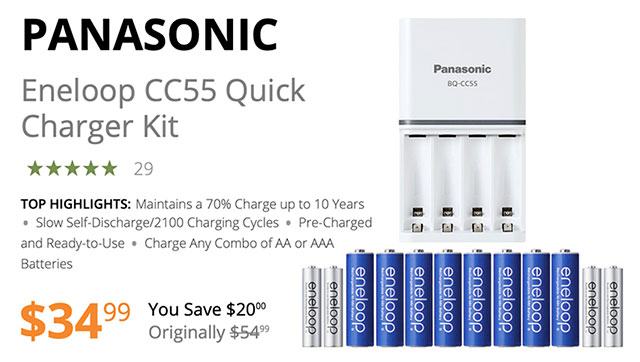 The included CC55 charger has four charging bays with individual LED charge indicator lights, which shows how much each battery has charged. To charge a fully depleted battery, it can take between three and four hours, and once all the batteries are fully charged, the charger will automatically shut off for overcharge protection.

Within the charger, the batteries can be placed in any combination by mixing the AA or AAA’s, and the configuration won’t affect the charging times. Because of their slow self-discharge, even after 10 years in storage the batteries maintain 70% of their charge, and can be recharged up to 2100 cycles.

The charger has an integrated, retractable, American AC plug, but can be used anywhere in the world because of its universal 100-240V capacity.