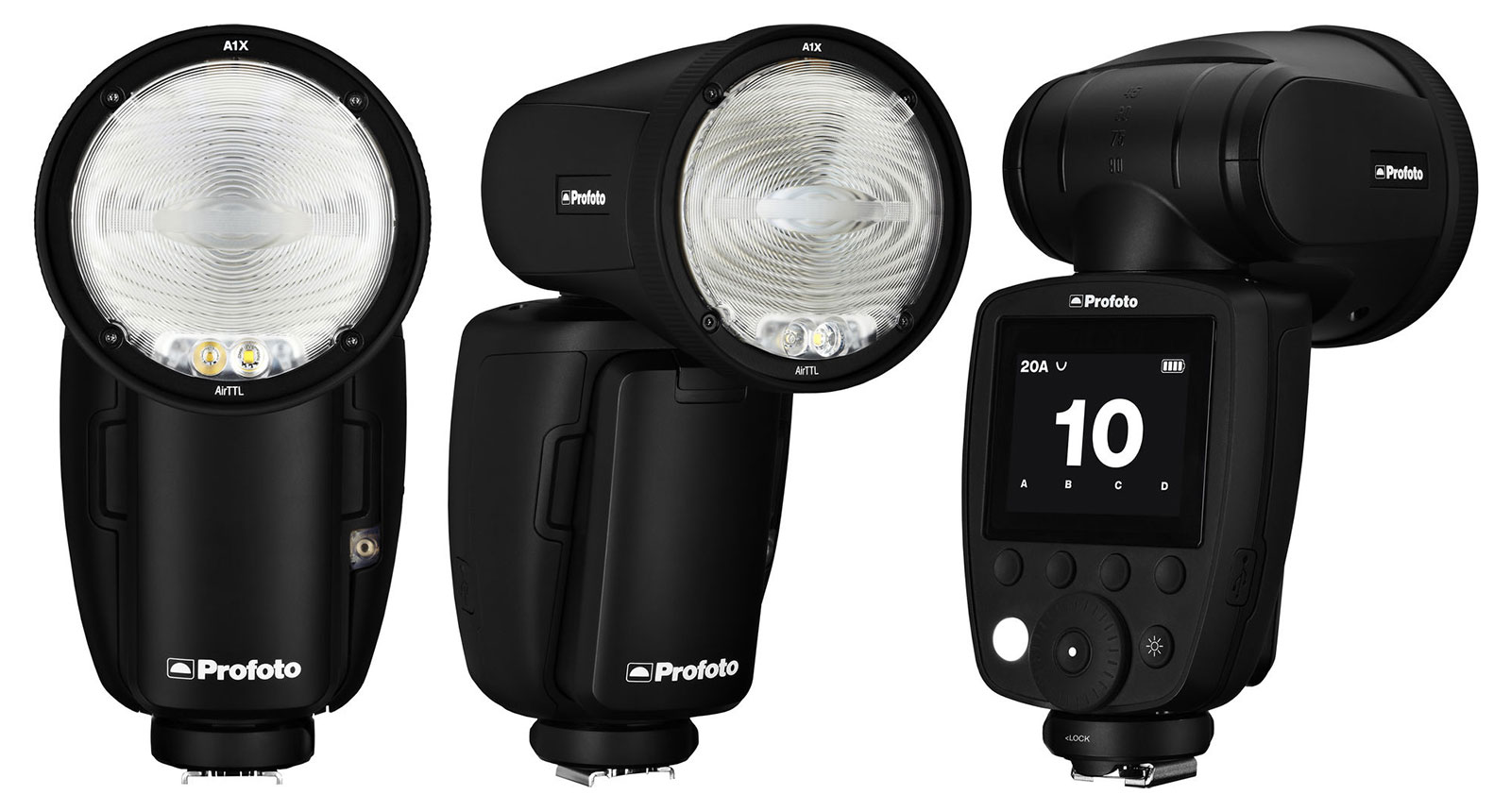 Profoto A1X AirTTL-S Studio Light for Sony ($895) has a new more powerful battery that gets 450 full power flashes instead of 350, faster full power recycling time of 1 second instead of 1.2 seconds, 20 wireless channels instead of 8, and an updated interface similar to the one on the B10.

The A1X was created for the professional photographer looking for portability and performance features or the ambitious non-professional who recognizes quality lighting but wants it comfortably and easily without the hassle of an overly technical interface. The A1X is easy to use. You can literally take it out of the box and start shooting. Weighing 1.2 lb including its battery, the A1X’s sleek matte black finish not only appeals to the eye but to the tactile sense as well.

The first thing you’ll notice about the A1X is its 2.75″ round, tilting, rotating head, which is the physical feature most responsible for the A1X’s natural-looking light with its soft gradual fall-off. The auto-zoom built into the head handles focal lengths from 32 to 105mm and the included Wide Lens gives you wide-angle coverage from 14 to 24mm. You can override the auto-zoom function at any time and make your adjustments manually. A Profoto Gel Kit ($99) with graduated CTO conversion filters and a fluorescent filter is also separately available to modify the unit’s daylight color temperature.

The A1X recycles in 1 second, faster than most flash units in its class and has action-stopping flash durations from 1/800 to 1/20,000 second. The A1X supports HSS (High-Speed Sync) allowing you to shoot at shutter speeds as short a 1/8000 second instead of 1/250 to blur a distracting background using a wide aperture while controlling strong ambient light behind your subject. The 76Ws head has an LED modeling light that can give you a preview of how the light is falling on your subject. It can be turned on or off, set to automatically adjust proportionally to the power level selected, or just switched to manual where it can be modified by hand. All adjustments are indicated on the exceptionally readable white on black LCD display. 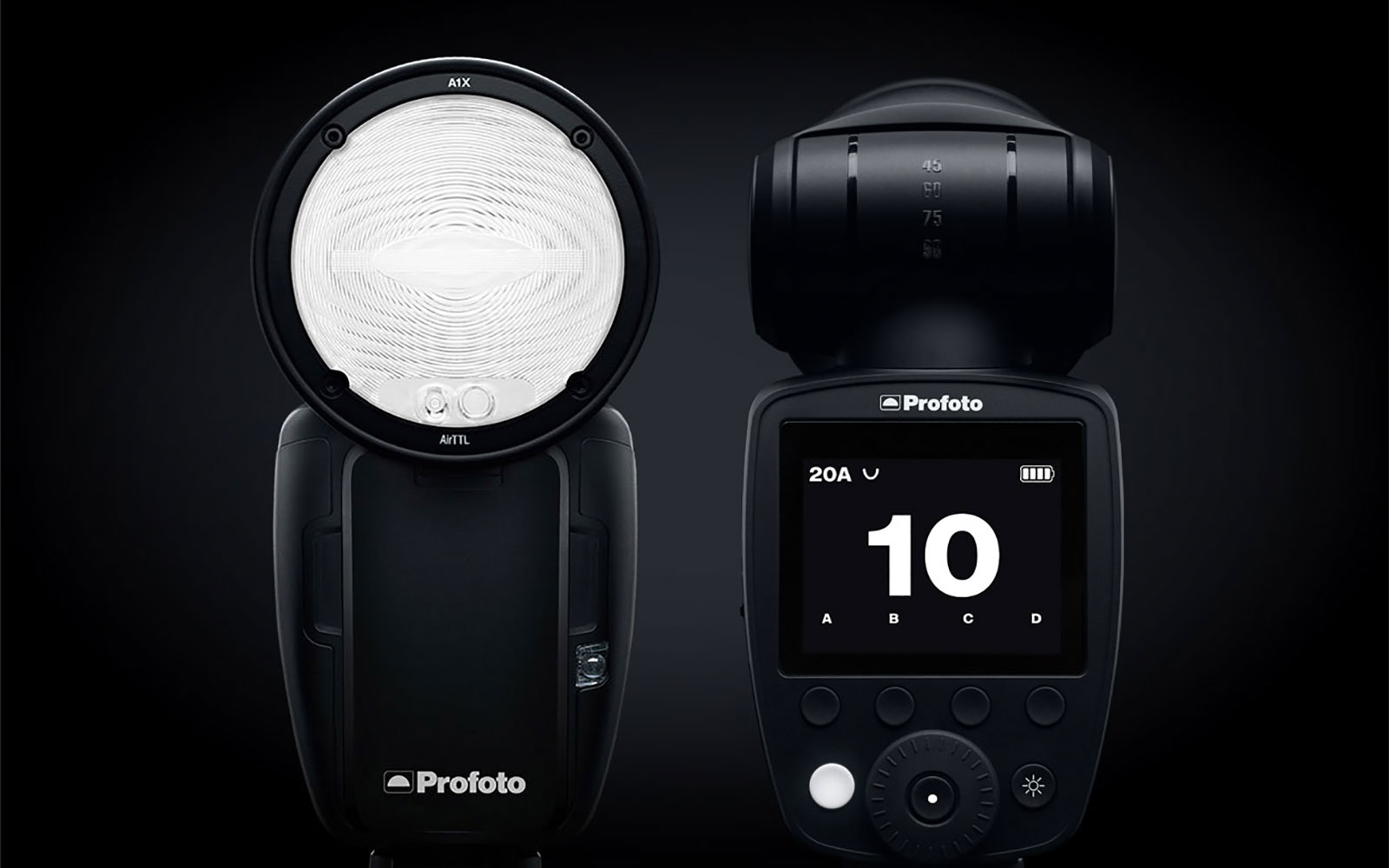 The A1X is powered by an included lithium-ion battery that has a capacity of 450 full power flashes (instead of the previous model’s 350). Power is topped up on an exhausted battery in about 80 minutes with the included 100-240 VAC charger. The battery doesn’t fade as its power is used, operating at peak performance until it’s depleted. Purchase of an additional Profoto Li-Ion Battery for A1X ($119) is recommended.

So far, we’ve been discussing the A1X used on-camera but when used off-camera it really earns its name as a “Studio Light.” The flash has a built-in transceiver that allows it to be used with other A1s, B2s or D2, B1, and B1X monolights. All the Air Remote wireless controllers can trigger the A1X at distances up to 1000′ and the Air Sync will give you simple wireless triggering, while the Air Remote will let you wirelessly adjust power, grouping, channel selection, and modeling light on/off.

It’s the Air Remote TTL that allows you to explore and control the A1X’s full capabilities. It wirelessly allows assignment of channels and groups as well as TTL and power level. In fact, the A1 has a switch that allows you to set your main light to TTL, switch to manual operation to adjust manual units in other groups to ratio their output, then switch back to TTL and return to the original TTL setting which was stored for you.

Profoto A1X also has +/-3 stops of exposure compensation that can be modified from the remote for your specific needs. The light also comes with a Bounce Card, 180-degree Dome Diffuser, Flash Stand, and a nylon bag with shoulder strap for storage and transport.