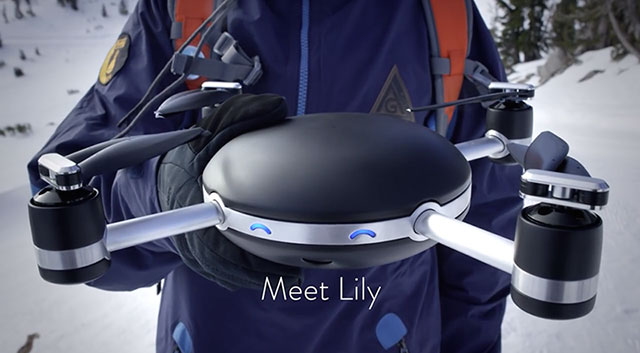 Want to own a camera drone that will follow you as closely as the cameras follow the Kardashians?

Lily’s built in camera sports a 12-megapixel sensor capable of 1920x1080p 60fps video recording (audio recording is handled by the wristband remote). You can enjoy frame rates of 120fps if you drop to 720p resolution. The lens delivers a 94-degree field of view for videos. Footage is saved to a MicroSD card or 4GB of internal memory. The internal battery takes about two hours to fully recharge.

Lily can cruise along between 10 to 50 feet in the air at a top speed of 25MPH for about 20 minutes. It can hover as close as five feet from its owner or fly as far away as 100 feet. It’s waterproof, too, so it can be thrown into the water for takeoff. Using computer vision, Lily executes its landing into the palm of your hand.

Simply throw the 2.8 pound drone into the air and it will fly off, following its owner through a wristband tracker. Either through an app or the waterproof wristband, Lily can be commanded to hover, follow, loop around or zoom in to a subject, all while recording videos and stills.

The Lily camera drone will cost $499 for pre-orders submitted before June 15th and $999 when it ships in February of 2016. Pre-order Lily here.