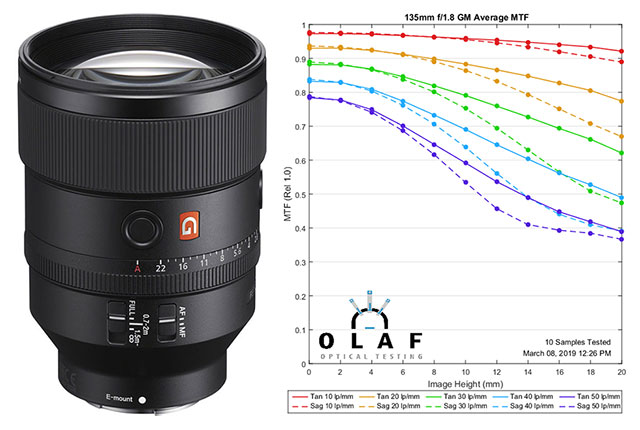 After testing 10 pre-release copies of the new Sony FE 135mm F1.8 G Master Lens, LensRentals calls it the “sharpest lens we’ve tested out of more than 300 lenses from all manufacturers.”

“Let’s make this simple and straightforward. In the center, that’s the highest MTF I’ve seen on a non-supertelephoto lens. The highest. Let’s put particular emphasis on the purple line, which is 50 lp/mm. We would consider an MTF of 0.5 at 50 lp/mm to be very acceptable. This is hugely better, nearly 0.8 in the center. We’ve never seen that kind of resolution before.”
– Roger Cicala, LensRentals

As sensor resolution increases, there comes a point at which a lens is no longer able to resolve more detail. The Sony 135mm F1.8 G Master has a much higher ability to resolve, so it pairs excellently with high-resolution high-resolution.

That means that the 135mm F1.8 G Master is designed not only for today’s high-resolution sensors, like the 42MP sensor in the a7R III, but to handle the imaging needs of tomorrow’s photographic gear as well.