Leaf Digital rolled out their new website last week with a brand new look and they pimp me out with a profile on their Testimonial Page where I talk about the color and look of Leaf Digital files and the advantages of true 16-bit digital capture. I’m a big fan of Leaf backs and their Aptus 75S is like having a handheld scanner that cranks out a 200mb scan every 1.2 seconds… 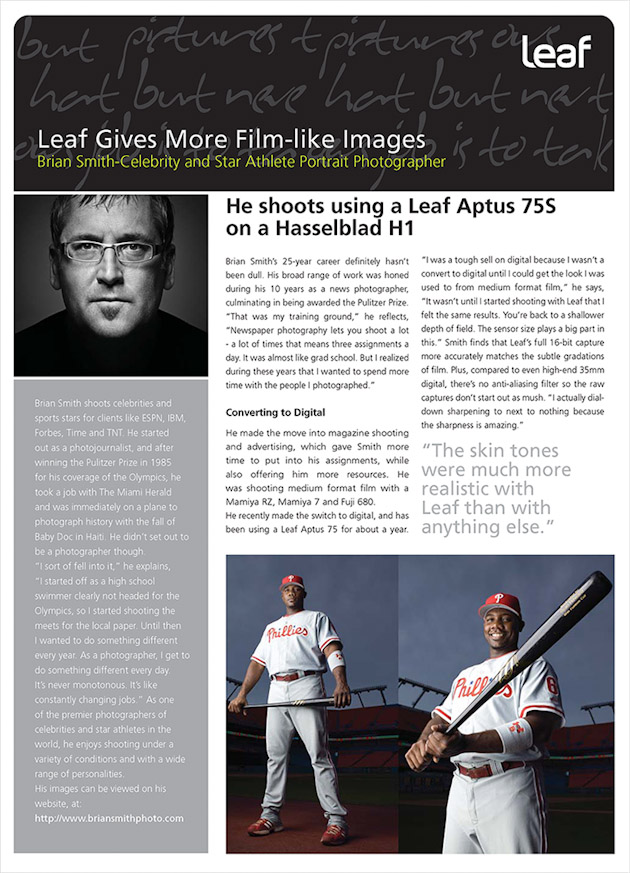 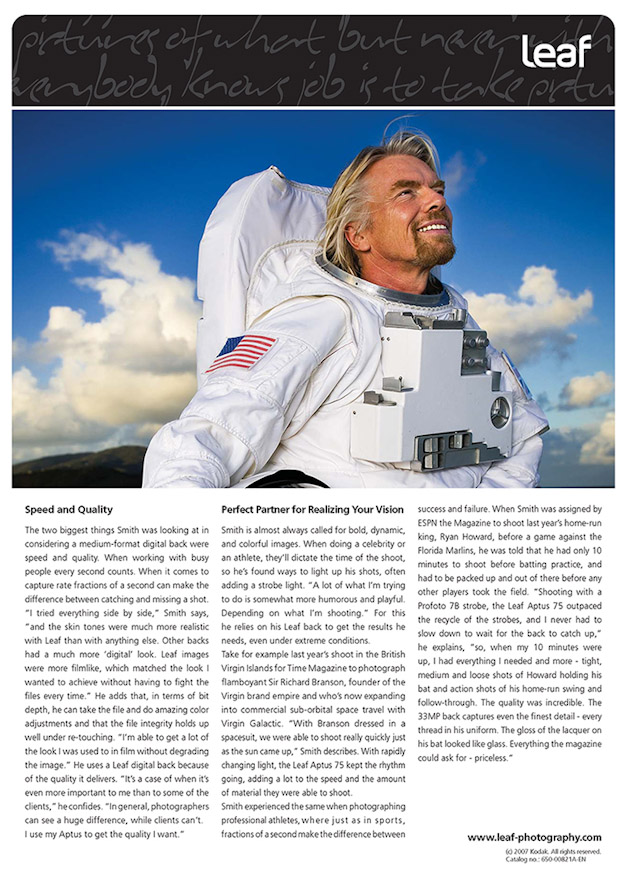 The two biggest things Smith was looking at in considering a medium-format digital back were speed and quality. When working with busy people every second counts. When it comes to capture rate fractions of a second can make the difference between catching and missing a shot. “I tried everything side by side,” Smith says, “and the skin tones were much more realistic with Leaf than with anything else. Other backs had a much more ‘digital’ look. Leaf images were more film-like, which matched the look I wanted to achieve without having to fight the files every time.” He adds that, in terms of bit depth, he can take the file and do amazing color adjustments and that the file integrity holds up well under re-touching. “I’m able to get a lot of the look I was used to in film without degrading the image.” He uses a Leaf digital back because of the quality it delivers. “It’s a case of when it’s even more important to me than to some of the clients,” he confides. “In general, photographers can see a huge difference even if clients can’t. I use my Aptus to get the quality I want.”

Smith is almost always called for bold, dynamic, and colorful images. When doing a celebrity or an athlete, they’ll dictate the time of the shoot, so he’s found ways to light up his shots, often adding a strobe light. “A lot of what I’m trying to do is somewhat more humorous and playful. Depending on what I’m shooting.” For this he relies on his Leaf back to get the results he needs, even under extreme conditions. Take for example last year’s shoot in the British Virgin Islands for Time Magazine to photograph flamboyant Sir Richard Branson, founder of the Virgin brand empire and who’s now expanding into commercial sub-orbital space travel with Virgin Galactic. “With Branson dressed in a spacesuit, we were able to shoot really quickly just as the sun came up,” Smith describes. With rapidly changing light, the Leaf Aptus 75 kept the rhythm going, adding a lot to the speed and the amount of material they were able to shoot. Smith experienced the same when photographing professional athletes, where just as in sports, fractions of a second make the difference between success and failure. When Smith was assigned by ESPN the Magazine to shoot last year’s Home-Run King, Ryan Howard, before a game against the Florida Marlins, he was told that he had only 10 minutes to shoot before batting practice, and had to be packed up and out of there before any other players took the field. “Shooting with a Profoto 7B strobe, the Leaf Aptus 75 outpaced the recycle of the strobes, and I never had to slow down to wait for the back to catch up,” he explains, “so, when my 10 minutes were up, I had everything I needed and more – tight, medium and loose shots of Howard holding his bat and action shots of his home-run swing and follow-through. The quality was incredible. The 33MP back captures even the finest detail – every thread in his uniform. The gloss of the lacquer on his bat looked like glass. Everything the magazine could ask for – priceless.”