Adrian Grenier’s thought-provoking documentary look at the life of a young celebrity paparazzi photographer premieres tonight on HBO at 9pm Eastern. Aside from his devastating good looks, Adrian Grenier is nothing like his Vinnie Chase alter ego from ‘Entourage’. I spent three days with Adrian making the rounds on Capitol Hill with The Creative Coalition in Washington, DC. and discovered there is much more to Adrian than those mega-star looks like his insatiable curiosity for the world around him. And one inescapable part of his existence are the paparazzi that follow him around. Rather than getting mad, Grenier decided he wanted to learn more. 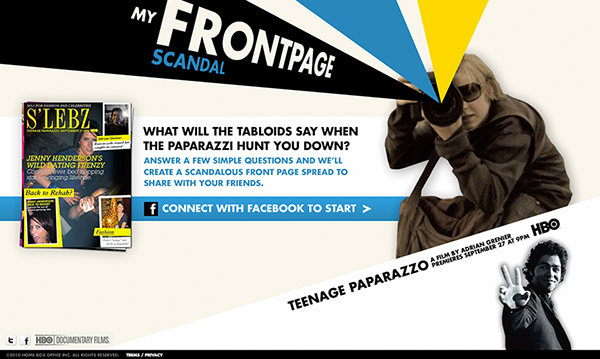 The documentary turns the camera on the paparazzi as it addresses our fascination with celebrity as Greiner takes the time to see celebrity from the other side through the eyes of a 14-year-old paparazzo. Grenier is surprisingly well-versed in photography showing the young photographer John Filo’s ‘Kent State Massacre’ Pulitzer Prize winning photograph in the hopes he could steer him toward photojournalism.