BRIAN SMITH ON THE VALUE OF PERSONAL WORK

Sometimes we need to be reminded of the lessons that got us where we are. 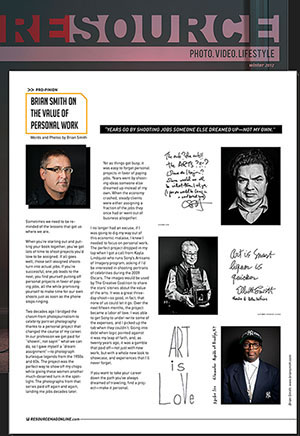 When you’re starting out and putting your book together, you’ve got lots of time to shoot projects you’d love to be assigned. If all goes well, those self-assigned shoots turn into actual jobs. If you’re successful, one job leads to the next; you find yourself putting off personal projects in favor of paying jobs, all the while promising yourself to make time for our own shoots just as soon as the phone stops ringing.

Two decades ago I bridged the chasm from photojournalism to celebrity portrait photography thanks to a personal project that changed the course of my career. In our profession we get paid for showin’, not sayin’ what we can do, so I gave myself a “dream assignment” to photograph burlesque legends from the 1950s and 60s. The project was the perfect way to show off my chops while giving these women another much-deserved turn in the spotlight. The photographs from that series paid off again and again, landing me jobs decades later. Yet as things got busy, it was easy to forget personal projects in favor of paying jobs. Years went by shooting ideas someone else dreamed up instead of my own. When the economy crashed, steady clients were either assigning a fraction of the jobs they once had or went out of business altogether.

I no longer had an excuse; if I was going to dig my way out of this economic malaise, I knew I needed to focus on personal work. The perfect project dropped in my lap when I got a call from Kayla Lindquist who runs Sony’s Artisans of Imagery program, asking if I’d be interested in shooting portraits of celebrities during the 2009 Oscars. The images would be used by The Creative Coalition to share the stars’ stories about the value of the arts. It was a great three-day shoot – so good, in fact, that none of us could let it go. Over the next fifteen months, the project became a labor of love. I was able to get Sony to under-write some of the expenses, and I picked up the tab when they couldn’t. Going into debt when logic pointed against it was my leap of faith, and, as twenty years ago, it was a gamble that paid of – not just with new work, but with a whole new look to showcase, and experiences that I’ll ever forget.

If you want to take your career down the path you’ve always dreamed of traveling, find a project – make it personal.