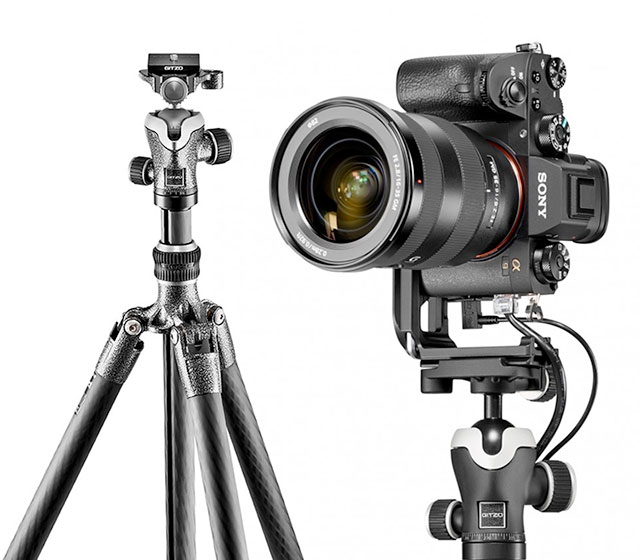 The black and silver travel tripod with carbon legs weighs only 1.43 kg. With a packed size of 43 cm, offers a maximum working height of 165 cm and is designed for 10 kg camera/lens combinations. At maximum leg spread and the use of the short center column is designed to allow low shooting angles. Legs lock using “Traveler G-Lock” locks, a particularly compact variant of Gitzo’s G-Lock rotary closure system, specially developed for travel tripods.

The Traveler Alpha is equipped with Gitzo’s most compact ball head. The pan and tilt axes can be locked independently of each other. For the transport, a carrying strap made of Italian leather in carbon look is included in the delivery.

Gitzo L-Bracket for Sony a7R III and a9 Cameras allows comfortable alignment of Sony a7 III, a7R III and a9 cameras and facilitates quick change between landscape and portrait. Milled from a solid block of aluminum, the new rail is the lightest of its kind, according to the manufacturer, it offers four mounting points for the camera designed for shooting video or tethered shooting in the studio. The supplied Allen key can be fixed in a separate holder.