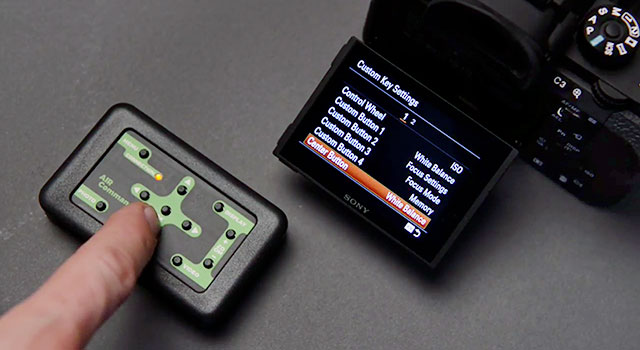 Sony’s Remote Camera Control is a great free smartphone/tablet app for basic control of your Sony mirrorless camera – yet I get many requests for a more “robust’ remote with longer range and more control of camera settings.

Airpixel AIR Commander for Sony ($189) combines 2.4GHz handheld AIR controller and a receiver that attaches to the camera with a range of 200 meters (650 feet) according to manufacturer specs. This looks like a good solution for Sony mirrorless users who want greater range and more control of camera menu settings than Sony’s free Remote Camera Control smartphone app can provide.

AIR Commander provides you the full access to the camera menu with all the menu functions of supported Sony mirrorless cameras. You can change:

Each console is able to pair with dozens of receivers. Once paired, all receivers react to commands from console at the same time. This allows you to synchronize the shutters of many cameras at once, which can be creatively used at drones or anywhere else.

AIR Commander establishes separate wireless communication between the transmitting console and receiver on the camera. This works in ISM 2.4GHz band, which prevents interference when used with a RC drone setup.

When the receiver is mounted to the camera and powered up, it takes just about one second for the receiver to send a data signal pairing it with the console. Once paired, the receiver is completely radio-silent, sending no wireless signal at all. AIR Commander only communicates when the button on the console is pressed. It takes just 0.001s to transmit a command.

Airpixel AIR Controller shown attached to an “all in one” HobbyKing 5 inch 800×480 5.8 GHz Little Pilot HD FPV Monitor with Mushroom Antenna and Bracket (Available for $130 on eBay)

AIR Commanders are in stock at the Airpixel eShop